We woke up in Gresham rested, recuperated and ready to face the day. We checked out of our motel on time, drove to the nearest MAX station and parked at a strip mall nearby, and set off on our day trip to downtown Portland.

MAX is a very popular system given the number of free spaces in the park-and-ride lot. There weren’t any, so we had to park in the hinterlands of a strip mall a few blocks away. The MAX system is almost identical to the San Diego Trolley we encountered many weeks ago. An electrical line is suspended above a set of well-kept railroad tracks, and modern electric streetcars dash down these tracks. In many urban areas, the tracks run down median strips or on the streets themselves.

Portland operates on the same honor system as San Diego. You buy a ticket from a machine at the station and board the train. If a fare inspector comes by and you don’t have a valid ticket, you get a ticket with a $50+ fine. That saves the expense of fences and turnstiles, and that savings was reflected in the fares ($1.50 each way from the end of the line to the heart of the city).

It was lunch hour on Wednesday when the MAX delivered us to downtown Portland. We found a bustling and thriving urban center. Musicians gave lunchtime performances in the plazas, and the sidewalks were as busy as those in Manhattan. Wednesday happened to be one of the days that the Farmers Market operates in a downtown park. Fresh produce and packaged products (salsa and apple juice, for example) flew out of the stands set up by area farmers and into the crowds of people circulating thru the market. It was a shining example of a successful downtown Farmers Market.

Portland, like many other cities, has a fare-free zone in the downtown area. We saved about 6 blocks of walking by hopping onto a newly-inaugurated streetcar for a couple of stops. We found some great Thai food, peeked thru the windows of the Chinese Garden (the admission price was a bit spendy for our tastes) and finished our walking tour of downtown before hopping on the MAX for the ride back to our truck.

Obbie first experienced Portland as a dumpy working-class town in the 1970’s and it seems to be on quite a rebound since then. We saw a lot less demolition and a lot more rehab of historic buildings than we see in the town we call home. La Crosse can learn a lot from Portland.

Continuing on from Gresham, we bypassed downtown Portland by following the banks of the Columbia River going westbound. On our left was Portland’s airport. On the right, we saw several exclusive gated communities on the water where massive yachts were tied to mansions on stilts. Traffic along the river road flowed smoothly and steadily except for a brief interruption for construction, and it was stress-free until we missed an important turn due to inadequate signage (see “signage rant” from a few days ago).

Once we had Portland firmly behind us we started building momentum down the Columbia River toward the ocean. We saw logging trucks, sawmills and more clearcuts while on the local community radio station Jello Biafra talked about the corporate takeover of America. We saw some majestic old bridges and got a distant glimpse of Mt. St. Helens.

As we got closer to the coast, the weather cooled down again and the logging towns gradually gave way to fishing towns. By the time we got to Ambrosia, Oregon, we were squarely in fishing territory and presented with our last chance to cross the Columbia River. From a distance, the last bridge to Washington (or the first, if you’re coming from the other way) looks like a fragile ribbon of steel stretching across the 4-5 mile expanse of river. Up close, it’s a splendid specimen of early 20th century American engineering. 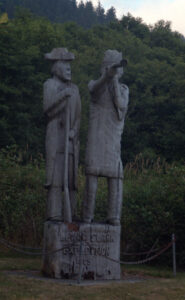 A sculpture commemorating the Lewis and Clark expedition, carved from the trunk of a redwood tree.

Lewis and Clark were disappointed because this site had brutal winds in the winter time. But we were there in the middle of the summer, and we enjoyed the break from the heat.