We came to the Motel 6 in Tumwater last night because we wanted to have Seattle within easy reach this morning. This also gave us time to study our maps and to make train and hotel reservations for our coming weekend in Vancouver.

As we were packing the truck to leave, Obbie’s back started to hurt. When we were killing time in Portland we bought a cane. We thought it was to help us reach things in the back of the truck, but instead it’s to relieve pain while walking. It wasn’t the same crippling pain he’s had before, but it slowed us down as we walked around Seattle.

After our visit to Portland we expected Seattle to have a better transit system. There is no regional rail network, nor is there a light rail system within Seattle. They do have an extensive bus system, including many electric buses similar to those in San Francisco, which are powered by lines suspended above the street.

Seattle has many steep hills, just as San Francisco does, and these electric buses do a much better job of climbing the hills than the diesel buses do. And the diesels are a lot more obnoxious to any poor soul who happens to be standing on the street next to one as it pulls away.

Seattle has a reputation as a very rainy city, but we hit town on a bright sunny day. We parked on top of a hill near the Madison Street Market (a big health food co-op) and embarked on our walking tour of the city. Walking down the hill toward downtown, we saw the old buildings being renewed by artists and professionals. The neighborhoods we passed through on this walk had a refreshing feel to them, like young energy was breathing new life into tired old places.

As we got downtown we saw how the convention center deals with rain. A transparent archway links the roofs of buildings on opposite sides of the street for an entire block, producing a block that’s sheltered from the torrents of rain that fall most of the year.

Another thing we started to notice were the pigs … slightly larger-than-life sculptures of pigs in various styles and themes, displayed on the sidewalks all over town. We found out that they are part of a fund-raising effort for our next destination, the Pike St. Market. This market encompasses several blocks of downtown waterfront where the public can buy fresh fish, fresh produce, groceries, souvenirs, and prepared food representing seemingly every culture in the world – all from independent dealers.

Music fills the air and adds to the festive atmosphere throughout the market. Musical notes are painted on the sidewalk in various places, designating where street performers can play. Each performer gets an hour “on stage” before (s)he must yield to the next one waiting. This guarantees that many performers get a chance to play, and that those going to the market get a chance to see a wide variety of performers. Most of them are quite good.

To get from the Pike St. Market to the area of the Space Needle required a walk thru a grungy part of town where homeless people and Hispanic day laborers hang out across the street from sky cranes building new pricey condo complexes. It’s nice to see so much improvement in run-down neighborhoods, but we can’t help but wonder where the poor people are going to go once the rich push them out.

The Space Needle was built for the 1962 World’s Fair, and it is now the landmark that most identifies Seattle. We skipped the elevator ride to the top because we could think of lots of better things to do with $35-40. The Space Needle is the centerpiece of the Seattle Center, a collection of major museums, a small carnival, and relics of the World’s Fair. 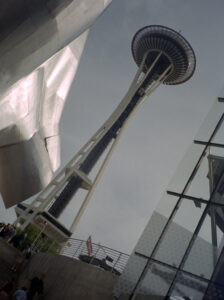 Looking up at Seattle’s Space Needle from near the entrance to the Experience Music Project. 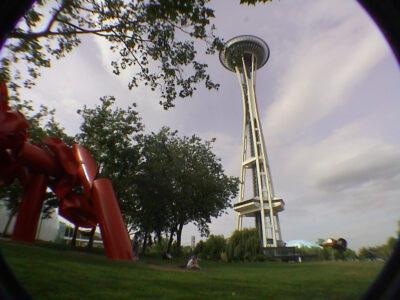 The Seattle Park that hosts the Space Needle.

Among the museums is the Experience Musical Project. From the outside, EMP looks like an enormous shiny metallic set of silver and purple blobs (of course, we found the purple metal to be particularly appealing). Inside, we could see the world’s largest video screen (about as high as – and wider than – an IMAX screen, about 5 stories high) along with the gift shop, cafe and bathrooms. To see any more required that each of us part with the better part of a twenty-dollar-bill, so we stopped at the lobby.

The most useless application of cool technology is Seattle’s monorail. For $1.25 – the same price as a bus fare – it will take you a mere ten blocks to the edge of downtown. This thing is NOT part of the transit system; you can’t transfer from the monorail to, say, a bus up the hill. So rather than being a link in a regional system to move people around, this train is little more than a joy ride for tourists and an overgrown ad banner sailing above the city streets. We saved our money for a real bus fare.

When we got back up the hill we did some shopping at the coop, then drove to Washington Lake Park to hang out while we waited for the commuter traffic to clear out for our drive north. We still had plenty of daylight when we made our drive to Bellingham. Tomorrow we take the train to Vancouver, and we found our way to the train station and our parking lot before booking our room for the night back up near the freeway.