The day began in Bellingham, which is our launch point for an overnight trip to Vancouver BC. There’s an Amtrak train that makes a run between Seattle and Vancouver, once per day in each direction. The northbound train leaves Seattle insanely early, and when we turn east, we plan to hug the northern border anyway. So as the last station on the US side of the border, from Bellingham we can leave later, return earlier, have fewer hassles with parking. and pay a lower fare than we would from Seattle.

Driving into Canada was not an option, since the Big Red Dog and its contents would be a nightmare to schlep across international borders. Carrying backpacks and riding trains is how we plan to travel in Europe this fall, so this is a perfect practice run.

Since the ferries to Alaska dock right next to the Amtrak station, there is a long-term parking lot nearby with very reasonable rates. After getting up early to catch the train, it was nice to be able to chill out while we were moving and to watch the coastal vistas go by without the stresses of driving. As we passed into Canada we could see the endless parking lot of traffic waiting to cross the border on I-5, and we felt glad to have avoided that mess.

The conductor went through the train passing out Canadian Customs Declaration Forms and asked us to fill them out. We kept our completed form with our passports, figuring that some official would want to see it later. As our train wound its way into the Vancouver station, it pulled to the inside of a long green cage made of chain link fence. We got off the train and stood in line outside, looking longingly through the fence at the many Canadian trains lined up for their excursions to the Canadian Rockies and beyond. At the front of the line we were each briefly interrogated by Canadian Immigration. “How long are you gonna be here? Where are you staying? Why are you here?” They wanted to make sure we’re not some Americans planning to become Canadian vagrants. Once we were deemed harmless, they let us out of the green chain-link cage and into Canada. They didn’t stamp our passports.

Twenty-some years after Seattle had its World’s Fair, they had one in Vancouver, but by then they were called “Expos.” Half-an-hour before our train got to the station – over 15 miles from downtown – we got our first glimpse of a very useful relic from the Vancouver Expo of the early 80’s. The Skytrain goes from the Waterfront to a point to the east well off the street map of Vancouver. It’s a fast elevated train, similar to the high-speed systems in San Francisco and many other cities. What makes this system unusual is that it is completely automated … there is no human operating the trains … it’s sort of like a high-capacity horizontal elevator.

When we arrived in Vancouver, the transit workers were on strike, so the buses and waterbus (a high-traffic passenger ferry that crosses the harbor from Vancouver to North Vancouver) were not running. But the Skytrain runs itself, and there’s a stop right next to the train station. Better still, the “Fare Inspectors” were among the transit workers on strike, so the Skytrain was essentially free. Needless to say, the trains were packed while we were there, but we only needed the Skytrain for the 15-minute ride between the Amtrak station and our hotel downtown. 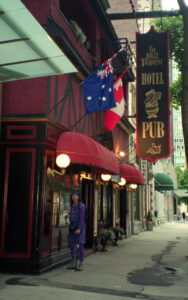 Obbie leans on his cane in front of The Jolly Taxpayer in Vancouver BC.

We stayed at an English-style B&B on Hastings St. called the Jolly Taxpayer. It was a three-story European-style hotel attached to a pub. The rooms were nothing fancy, but they were wonderfully functional, and the price of $90 (including breakfast) seemed quite reasonable for the downtown location until we realized that 90 Canadian dollars are about 60 American dollars … then we were ecstatic. The shower is “down the hall” but each room has its own sink and potty, and if you need a phone it’ll have to be the pay phone in the lobby. But we could live with that to support these nice people with a nice place at a nice price.

We were wearing our bright purple outfits while we explored Vancouver. One passing hippy smiled and accused us of looking like “a couple of grapes.” Many people asked if we were from Montreal, and told us we’d fit right in there. Someday, we’ll have to visit Montreal.

We haven’t been to Britain yet, but Vancouver felt like a very British city. We only saw the downtown area, which was very cosmopolitan with visitors from all over the world. We couldn’t help but notice how the magnificent old buildings and the ambitious new ones intermingled, contrasted, and sometimes even complemented each other.

Next to San Francisco, Vancouver has the second-largest Chinatown in North America. This harbors a diverse Asian population and attracts a steady stream of visitors from all over Asia. We found some great Vietnamese food in the neighborhood.

When reading prices in Canada, they seem a tad high but not exorbitant by big-city standards. But once you do the math and translate the prices into American dollars, they’re usually quite a bargain. The American dollar is strong in Canada: at the train station, $100 US bought us $146 Canadian. We’d have done better at the banks downtown, but it was Saturday, and the convenience was worth it for our relatively small transaction.

There are so many things to see and do in Vancouver that it could have taken weeks to do them all. But with Obbie’s back still hurting, we figured that stress (driving, keeping schedules, etc.) was probably a factor. Our favorite stress-relief medication is much more tolerated and accepted in Canada than it is in our home country. We decided to investigate the rumors and relieve our stress at the same time, so we headed for the coffee houses down the street. 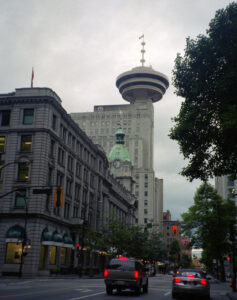 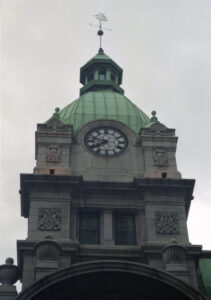 The clock tower of the Old Post Office on West Hastings in Vancouver BC. 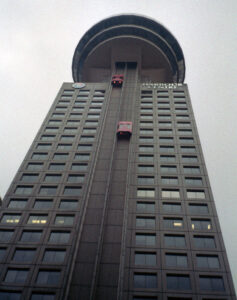 The Harbour Center, with exterior elevators leading to a rotating restaurant in the “lookout”. 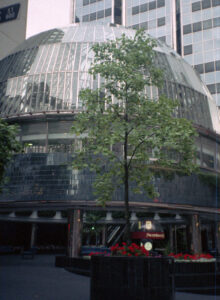 A glass dome covers this public plaza on Hastings Street. 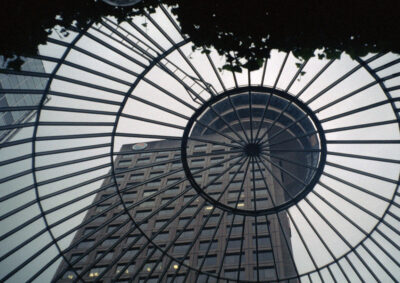 Looking at the Harbour Center lookout from under the glass dome on West Hastings Street. 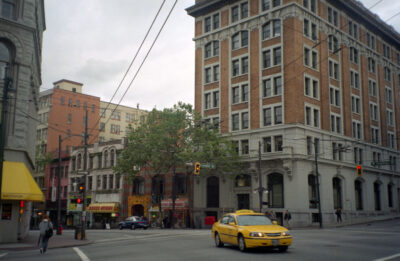 The intersection of Cambie and West Hastings in Vancouver BC. 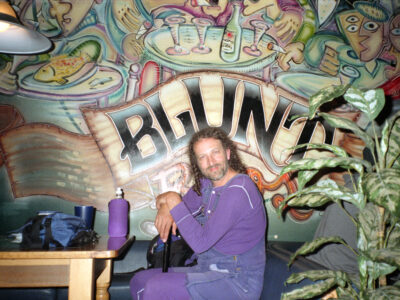 Obbie (dressed in his “grape suit”) relaxes at Blunt Brothers in Vancouver BC. 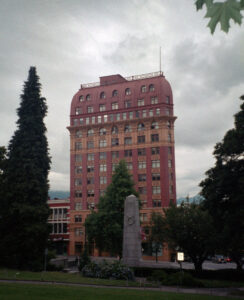 What we learned is that you cannot buy your medication from the coffee houses, but you are free to use whatever you happen to have. Visiting Americans must either find something on the street (not very hard from what we hear), or share a round of drinks with gracious locals. Many new friends are made, and many deep and profound conversations take place around the coffee house tables. It was a refreshing break from the relatively fascist conditions back home.

The Canadians are pushing the envelope for the rest of the continent, but they are doing so slowly and carefully. Vancouver is a very friendly city, and we felt safe on the streets even late at night. The friendliness and progressive attitudes of Vancouver – as well as all the fun things to do near there that we didn’t have time for – put it high on our list of places to someday go back to for a longer visit.