On Friday morning the day started in our campsite near the Oregon Country Fair, and we were more than ready to be festive.

It annually takes place in mid-July at a site near Veneta, Oregon, which is about 10 miles west of Eugene. The sprawling festival grounds are carved out of a densely wooded river valley, and much of the infrastructure is built of materials from the site. For three days each July, this site becomes a world inhabited by thousands of craftspeople, kitchen artists, performers and fair staff. 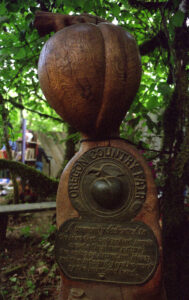 The peach is the symbol of the Oregon Country Fair, and its mission is stated on this monument. 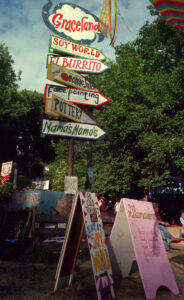 Signs direct visitors to various food and craft vendors in this area of the fair. 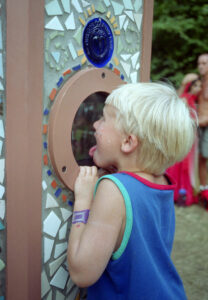 A young visitor enjoys a larger-than-life kaleidoscope on the festival grounds. 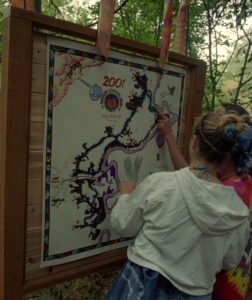 The Oregon Country Fair is spread out in a complex layout, but there are maps to help find the way.

Visitors can also “find their way” with the “Revolutionary Oracle.” 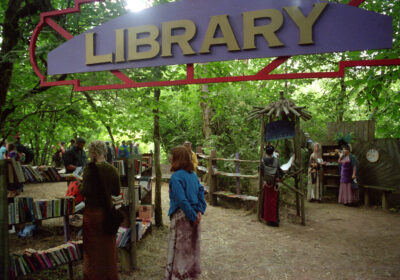 The Oregon Country Fair even has its own library.

Within this vast world are about half a dozen official stages, while seemingly hundreds of plazas and alcoves harbor street performers of many types. Stilt-walkers, costumed characters and parades wander the streets. Everywhere you look is a colorful specimen of creative originality. 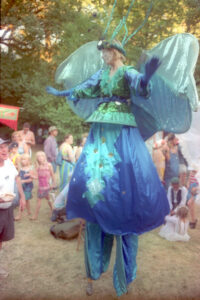 A costumed stilt-walker wanders through the festival grounds. 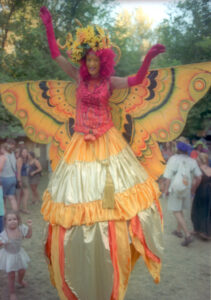 During a struggle with a camera, one performer whispered, “you can take the picture with your mind.” 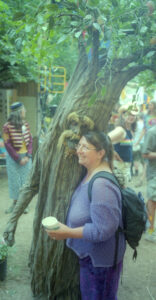 Rozie has always been a tree-hugger, but this tree hugged back. 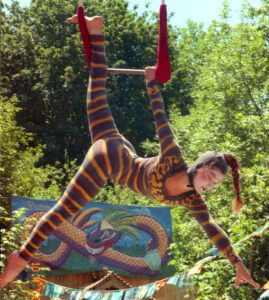 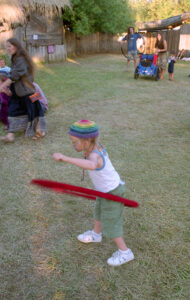 There was nothing to stop young visitors from putting on their own performances.

One of our many missions at the fair was to find the Phurst Church of Phun, an institution founded by Wavy Gravy and other members of the Merry Prankster crowd. (To those who don’t know, Wavy Gravy is a clown by trade. He is best known as the deliverer of many of the most memorable stage announcements at the original Woodstock festival, and since then he’s been the main spokesman for the “Nobody for President” campaign.) Before the fair started, we had heard that Wavy Gravy was there either baptizing or ordaining people.

We spent much of the first day looking for the Phurst Church of Phun. They were even marked on the fair map. But when we got to the appointed location, they weren’t there. Even the people at the Info booths were mystified as to what was going on. Late on the second day, we overheard a conversation about Wavy and the Phurst Church of Phun. Upon inquiring as to its location, we were told, “you can’t find it, it finds you.” We were not meant to be baptized or ordained this year.

One interesting place we passed through was the Bureau of Artistic License. We were following a rumor that they had info on Wavy’s whereabouts. Rozie stopped at their booth and asked, and the woman she’d asked pulled out a badge and issued her a citation. The charge on the citation was “…Huh?” Obbie was then issued a citation for being with Rozie.

We were given certificates and asked to draw self-portraits on them, but the certificate was not valid until stamped. The staff of the Bureau of Artistic License had to be satisfied with one’s artistic ability and spirit before invoking their sacred stamp. Their booth includes a little stage on which one must perform something … anything … almost. Rozie put on a grass skirt and grabbed a big plastic shark from the prop area and did an “exotic dance” for about 30 seconds.

Obbie brought his self-portrait to the desk, thinking that was it, and was told “you might have to play a horn or something.” So he played the funeral march on his hand in rasberry and was promptly issued a stamp. Sometimes they wanna put you through the wringer, sometimes they just wanna get rid of you, but anyone who tries gets a stamp. Lotza fun for all involved. 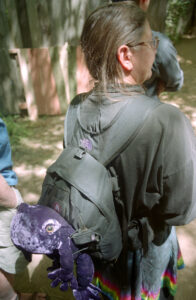 Gorf got to experience the Oregon Country Fair from Rozie’s day pack, and met lots of new friends. 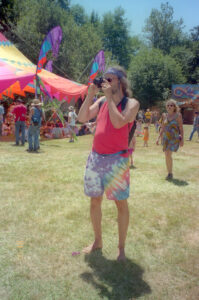 Obbie lines up a photograph. 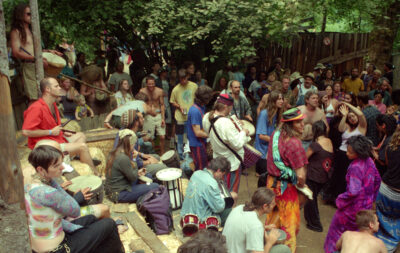 There was a designated drumming area near the heart of the Country Fair grounds. 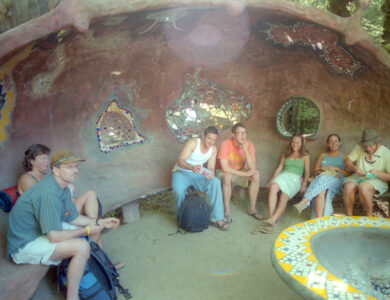 The Oregon Country Fair had many unique and inspiring alcoves for “hanging out.”

A friend asked us if we’d seen any shows, and we had to admit that most of the performances we heard were in the ambient air. We saw many intriguing street shows … everything from your typical folk singers to competent bluegrass bands made up entirely of pre-teens. There was a class of performers that simply prowled the streets all weekend. There was a small group of cheese people, there were blue people, there were groups of costumed stilt-walkers, and there were parades. There was a marching band that paraded around playing goofy old tv theme songs, such as the “Rocky and Bullwinkle” theme. Most of the other parades were reminiscent of Mardi Gras floats, only kind of scaled down. One could spend all of their time at the fair taking in fantastic stage shows, but one would miss a lot by doing so.

We missed a lot of shows doing what we did, which was mostly walking around the fair and eating. Hundreds of artisans’ booths lined the streets, turning the grounds into a sort of organic outdoor craft mall. The distances to cover were much longer than those in a typical mall, so we got plenty of exercise each day just going from place to place. And when we were hungry, there were plenty of huge plates of healthy and tasty food to be had at surprisingly reasonable prices. 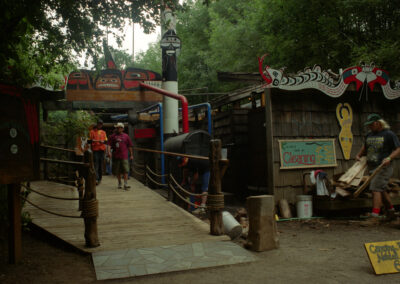 “The Ritz” is the Oregon Country Fair’s onsite sauna. 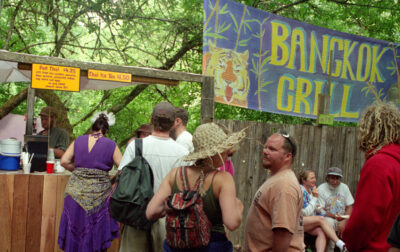 The Bangkok Grill was one of the most popular food vendors at the fair, as they served a very satisfying Pad Thai. 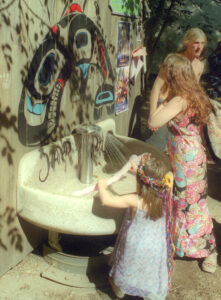 There were plenty of well-kept cleaning stations on the fair grounds.

We never got to see the grounds of the Oregon Country Fair after dark, when this light would have illuminated the area.

There was also a little bit of self pampering to be done at the Country Fair. First we shared an hour of massage by one of the many skilled practitioners set up on the fair grounds. Then we had to take in the legendary sauna. For less than the price of a typical truck stop shower, they provide you with a place to check your valuables and cubby holes for everything else. Then you get to spend as much time as you want wandering between the open-air showers, the sauna (seats 50) and the fire pit. The concrete and tile of comparable public facilities are nowhere to be found … everything is wood and stone, well-built, clean and well-maintained. Don’t do the Country Fair without stopping there at least once.

One thing we didn’t like about the fair has to do with how big it’s become. There are now upwards of 20,000 attendees, and somewhere between 3,000 and 5,000 people work there in some capacity. The fair officially closes at 7 pm, and shortly after that begins The Sweep. This is when everyone without an armband or photo id pass is swept from the fair grounds … even if you’re friends of someone on the crew you’ve come cross-country to see … even if your daughter has a booth and you’ve come cross-country to see her.

They are not very amenable to exceptions. Legend has it that after dark, the fair turns into a completely different festive and magical world. Even though the reasons for the sweep are understandable (security for the vendors, safety for women & children, etc.), it left us feeling excluded from festivities we would have very much liked to be a part of. Hopefully someday the fair people can come up with a better way.

Camping near the fair is not hard to find if you come early enough. We camped at a private campground on Suttle Road, which runs north of the grounds from Elmira. Our campsite was closer to the gate than the parking spaces of those who drove to the fair. Bringing a bike is a good idea for getting between campsite and fair grounds, even though bikes are strictly verboten within the fair (and not a very good idea there anyway). The fair and major further-flung campgrounds are also well-served by shuttle buses. This is a major event, and the organizers seem to be doing everything they can to keep it low-impact. 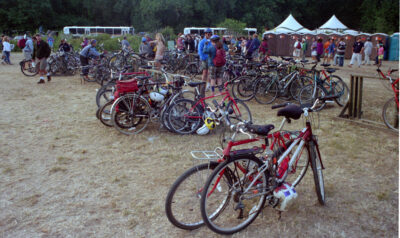 Our bikes lean into each other in the bike parking area just outside the main gate. 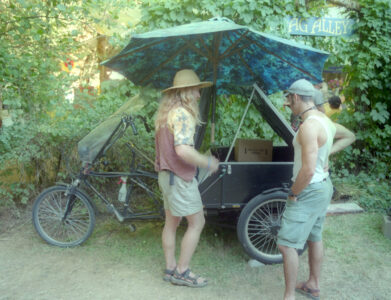 One of many human-powered contraptions we saw performing various duties on the fair grounds.

After our three nights and three days at the Country Fair, it was time to pack up our camp and head back to Springfield. This time we were delayed by a hippy kid who desperately wanted to borrow Obbie’s bike to find someone in the large commercial campground across the road. He left a large djembe drum as collateral, but we had to wait longer than we wanted for the bike to come back.

The drum is comparable in value to the bike, but the bike had much more value to us right now. Just as we started to wonder where we were going to put the drum – and how to replace Obbie’s bike – the guy returned with the bike, retrieved his drum, and everything was right with the world.

We went back to Springfield Sunday night, and once again set up camp in Becca’s back yard.