By our standards, we got a really early start. We had our campsite packed up and were rolling down the mountain by 9 am. We went to Mt. Shasta City, the small town at the base of the mountain, and grabbed coffee and bagels, then we went to the ranger station for our permit to climb the volcano.

Two kinds of people come to Mt. Shasta. There are those who stay in town and look at the mountain, and there are those who climb it as high as they can. We were in the second group, but just barely … we got about two miles up the trail, just over a thousand feet higher than the trailhead.

We hiked from a trailhead called Bunny Flat to the Horse Camp. The Horse Camp is an old stone lodge at 8000 feet built by a mountaineer who settled there after the Civil War. Early in the 20th Century it fell into the care of the Sierra Club, which cares for the lodge to this day. It has fantastic spring water, a wood stove fitted to the original fireplace, and many services useful to most of the other visitors: the summit climbers.

Horse Camp is a strategic base camp for the people packing to the summit. We’d see them walking by carrying ice picks and ice cleats (whatever you call those long spurs you clamp to your boots to climb the face of a glacier). They were far more ambitious than we were that day, though we do wish them well.

They say the guy who built the lodge hiked from there to the summit with a buddy of his in five hours, just before his 70th birthday. All the hippie hikers were overwhelmed by that achievement, as they pondered how much further up the volcano to set up camp for their summit climb the following day.

A sign on the wall: “Reaching the summit is optional. Returning is not.”

What we were most impressed with was the first mile from Horse Camp toward the summit. The first caretaker built a causeway of huge flagstones toward the wall of the first serious climb. Everyone who crosses this alpine meadow can now walk on this trail of rocks without harming the delicate plant life of the meadow. An impressive achievement. 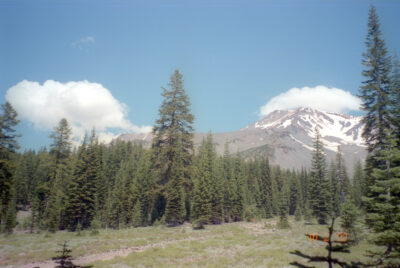 A view of Mt. Shasta from Bunny Flat Trail. 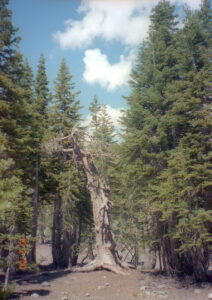 Trees take a long time to decompose at this elevation. 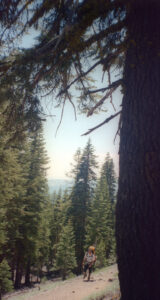 A hiker climbs the last steep approach toward the Horse Camp shelter. 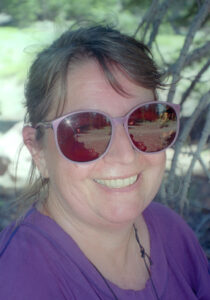 Rozie enjoys the day on the mountain. 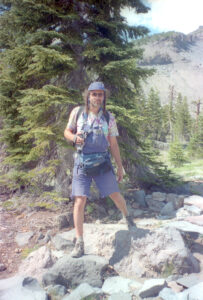 Obbie is in his element. 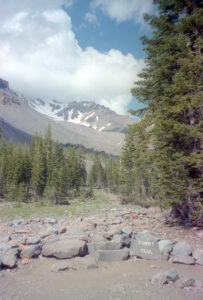 The beginning of Summit Trail, from Horse Camp on Mt. Shasta. 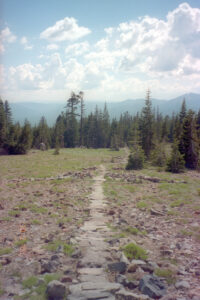 Long ago, mountaineers laid flagstones on the trail to save the delicate flora from trampling. 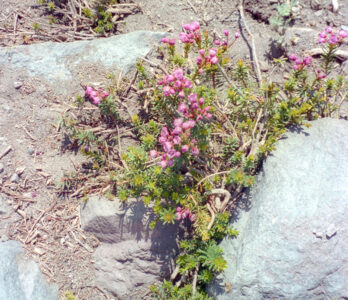 Some of the plant life the Summit Trail was built to protect. 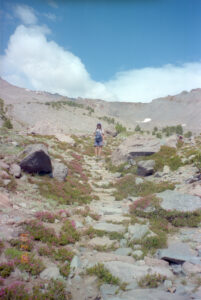 Obbie walks along the flagstones of Summit Trail. 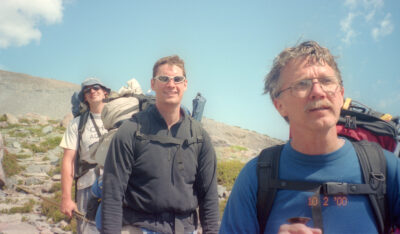 We met this group of hikers who were on their way back down from the higher parts of the mountain. 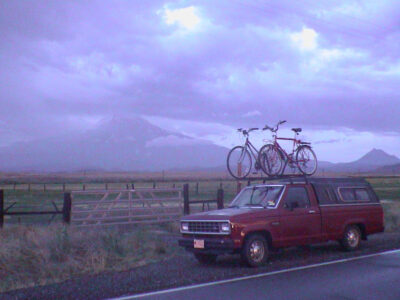 Late in the day, Mt. Shasta provides a backdrop for a roadside stop on the way to Oregon.

It was fun to interact with the serious mountain climbers we met along the way. As we were resting for our hike back down, an older guy (maybe in his 70s) came trotting up the last steep approach to the Horse Camp. “Does the trail ahead get any steeper than this, or is this as steep as it gets?”

Some of the younger hikers tried to ask tactfully, “Are you sure you want to take this on?” “I climbed Mt. Whitney earlier this year.” No further questions. Here’s hoping that we’re in that good of shape when we get to be his age.

The volcano rises so dramatically from the surrounding countryside that it generates its own weather. We weren’t far away from the mountain when we got hit with some serious wrath-of-god thunderstorms. Hope all those hikers on the mountain are OK.

In Weed, California (for some reason we just had to stop in a town called Weed) there is an old roadside diner called the Hi-Low Cafe, where they know how to feed someone who’s been hiking around on the mountain all day. They had an item called garlic fries and hi-low potatoes which demonstrated that someone in the kitchen knows how to use garlic. It was some of the best American diner food we’ve ever found, and there was plenty of it.

We got across the Oregon state line to make the first in a series of visits to transplanted La Crosse people. Our friend Eddy and his sweetie Mimi have a fantastic little farmstead going near Ashland, but when we got there they were in San Francisco. It turns out that they were in the Bay Area while we were, but we didn’t get the message in time. Such are the hazards of road life.

Their housemates Vessna & Malcom set us up in a guest cabin, where we spent our first night in Oregon.