Our day started in a cheap motel room in Oakridge, Oregon. We got out just before check-out time and found breakfast at Mannings Cafe down the road. It was a nice basic breakfast, with OK food and enough of it to be satisfied. After days of wonderful coffee, theirs seemed rather lame, but we still thought it was good to find a place like this in the boondocks.

We drove up to Crater Lake Wednesday afternoon, but only had time for a short hike. After taking some pictures from the rim of the crater, we followed the Lightning Springs Trail. This trail alternates between groves of Douglas Fir and an ecosystem we’d never seen before: pumice desert. The ground cover on pumice desert was very sparse and unique, while around the edges young fir trees would be encroaching. There’s a hike-in campsite near Lightning Springs itself, which would be a good base for further exploration of the mountainside. 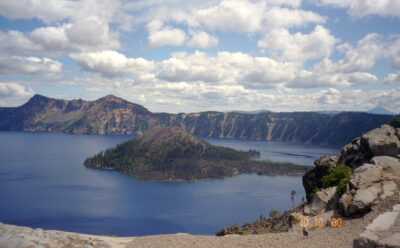 Our introductory view to Crater Lake. 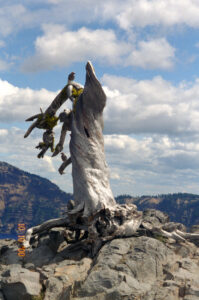 Ancient stumps that refuse to decompose seem to be a common feature high on these volcanoes. 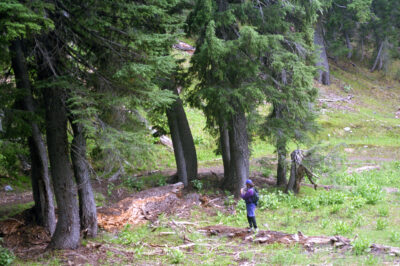 On our hike down the side of the mountain, Obbie stands on a disintegrating log. 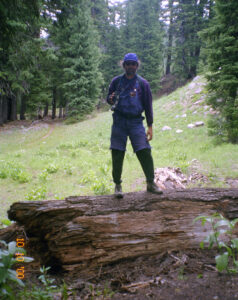 This log is a much higher and more solid perch.

While we were hiking, the air was leaking out of one of our tires from a nail that we picked up someplace. So we limped to Crater Lake Village, found a pay phone and called AAA. We were told the mechanic would be coming from Chemult, about an hour away. While we waited, we took in the buffet meal at the Watchman Restaurant.

The food was standard fare for a dinner buffet, well prepared but nothing special. There was a big picture window with a nice view of the lake, but since the window was by the entrance there were always crowds of people milling around in front of it, so we couldn’t really see anything. The ambience wasn’t helped by the number of families with whining and bratty kids.

The AAA guy showed up just after we’d finished dinner, but things didn’t go well. As with most small pick-up trucks, our spare tire is suspended under the bed toward the rear of the truck. When a trailer hitch was added, it made it almost impossible to get the tire out.

We stressed to the AAA dispatcher: “Make sure he brings tools, because a trailer hitch needs to be removed before the spare will come out. Make sure he has a plug-repair kit so he can fix the tire on the spot if he can’t get the spare out.” He showed up with no tools and no fix-it kit. He crawled around under the truck for half an hour cussing at it before coming up with a solution: Tow us to his shop in Chemult.

Chemult is an hour away, the wrong way. We ended up getting towed to Roseburg in hopes of getting the tire fixed in the morning … 95 miles away, just barely within the limits of our AAA+ membership.

So that’s where we sit now, at the end of a kind of bad luck day. All the cheap motels in Roseburg were nowhere near any repair shops. The only repair shop near a motel was by a Best Western. So in a town full of $30 rooms, we’re in a Best Western.

And we’re still fuming about the utter incompetence of that AAA driver. But on the other hand, he might have been scamming AAA. After all, he gets paid for towing us nearly 100 miles to Roseburg, even though it’s free to us. He gets paid a lot more than he would for fixing the tire on the spot.

At any rate, not having our tire fixed where it could have and should have been fixed…. that deprived us of the scenic drive to Roseburg. Maybe tomorrow will be better.