Today is a big driving day, as we’re heading to Mt. Hood. So by our standards, we got an early start being out of Heather’s house by 10:30. We wanted to take some time to have lunch at Nearly Normal’s, a vegetarian place where one of our transplanted La Crosse friends is working. We shared an order of deluxe potatoes and a breakfast burrito, and were quite satisfied. Much of the food is organic, and there was plenty of it. It’s a bit off the beaten path, but well worth tracking down.

To get from Corvallis to Mt. Hood, we had carefully plotted a course that avoided Salem and Portland. We crossed the Willamette River via car ferry, stopped at a wildlife refuge, and saw many other wonderful and unusual things on these back roads. But this particular drive will be best remembered as the inspiration for the Signage Rant.

Those of us who live in Wisconsin may not appreciate it, but our roads – even our back roads – are very well-marked. When a decision-making point is coming, we usually get signage that explains all of our options well in advance. Then when we get to the point of decision, we are reminded of our options by yet another set of signs and arrows.

On most of the West Coast – especially in Oregon – the signage has been pathetic. We cannot count the number of turns we’ve missed due to missing signs, poorly positioned signs, or signs that couldn’t be read until it was too late. It’s easy to see how drivers unfamiliar with local roads can cause accidents by making dangerous u-turns or turning from the wrong lane – maneuvers which wouldn’t have been necessary given adequate signage. Good signs may be expensive, but it is highly likely that people have died because some state’s DOT tried to save a few bucks on signs.

The big agricultural product of this part of Oregon is grass seed… the stuff that the rest of America spreads on dirt to try to grow lawns. Much of this part of the state is turned into massive (mile after mile) lawns every spring. But instead of mowing the grass, it is allowed to grow and go to seed. After combines harvest the seed, the grass is baled up for livestock feed and bedding, and then the fields are burned off.

The burning cleanses the fields so that the next crop of grass is free of weeds which would contaminate the next batch of seed. The burning also fills the skies with big clouds of smoke which used to make everyone gag. The pollution agencies decided to ban the burning unless the atmospheric conditions were just right.

Now the government keeps track of the weather, and the farmers can’t burn unless and until they’re told it’s ok. The smoke-filled skies and blackened tracts of land of western Oregon are all part of the price we all pay for our lawns. All we could think about is how much food could be grown on all of that land and with all that water.

Mt. Hood is another dormant volcano, standing at over 11,000 feet. When we got there we made a stop at the Timeberline Lodge. It’s a big place, built by craftspeople and artists as part of a Federal work project in the 1930’s. People that like to design and build will marvel at the way this place is put together. People who are into art and aesthetics will marvel at the carvings incorporated into seemingly every nook and cranny. 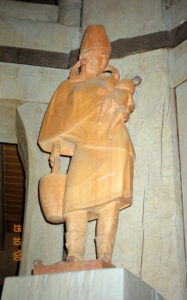 One of the wood carvings in the lobby of the Timberline Lodge on Mt. Hood. 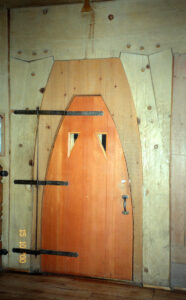 An innovative set of hinges work with an odd-shaped door at the Timberline Lodge. 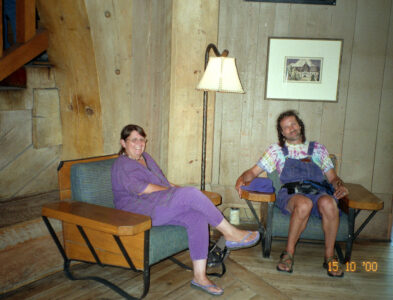 We relax on some of the original furniture in the lobby of the Timberline Lodge.

The picture window in the back of the lobby of the Timberline Lodge offers this view of Mt. Hood.

There’s a marvelous view of the mountain above, and also a great view of the mountains to the south, including Mt. Jefferson, another 10,000-foot-plus peak about 50 miles away. You don’t have to be a guest to go in and hang out in the lobby for a while, but rooms are not as expensive as we’d anticipated. If any of the sub-$100 rooms were still available, we might have booked one.

We stayed in a National Forest Campground nearby called the Alpine Campground. It was a very nice place to us in the evening … maybe a touch close to the road, but there was almost no traffic after dark. It was quiet and peaceful with a vivid display of stars.