We signed off last night from a Best Western in Roseburg, next door to one of the town’s only service stations, where the Big Red Dog was deposited by a tow truck driver from Chemult who couldn’t (or wouldn’t) fix our tire at Crater Lake. By the time we got to the gas station where the truck was parked, they had already done what the AAA guy at Crater Lake should have done last night: fixed the tire with a “plug” repair kit. The kid at the garage said it was a rock … apparently a very sharp rock, or one that hit the tread exactly the wrong way.

With the exception of the bozo we had to deal with last night, we’ve had pretty good luck with mechanics. Perhaps this guy from Chemult was pay-back for all the excellent service we’ve had. Now if only Sam’s Club would actually honor their road-hazard warranty on our tire…

Before we move on, we need to respond to a message from one of our readers that was entertainingly critical and had a thread of truth buried under its sarcasm. What we appreciated about the message is that it forced us to ponder and articulate the reasons for these explorations and for the reporting we are doing.

This message was in response to our definition of “mutants” that was part of the Grand Canyon episode.

so guys you are on this trip with a nice  bit of change in your tie dyed purple pocket.  and what do i read but this venom about how everyone else is f***ed up in your version of the world.  no one drives right no one appreciates nature as well as both of you. and thank the lord your such fabulous tour guides. with such great in sites in to ancient architecture.  come on lighten up and have some fun. and get off that organic soap box your on.  instead of complaining about the other people at the grand canyon  did you love it wasn’t it beautiful at sunset.  wasn’t it breathtaking what nature has done.  instead of what a piece of shit people are that have come to look at from the air. so let your considerable amount of hair down and relax and chill and enjoy yourselves.  let your love of what you see come through.     love  a mutant!!!!!!

Our response is that any travel writer can talk about how beautiful everything is, and we do try to do that. But every beautiful place has its flip-side, and it would be a lie of omission not to mention at least some of the ugly things that we see. Every glossy tourist brochure will tell you how beautiful the Grand Canyon is from the air, but they won’t tell you how noisy and annoying the planes and helicopters are to people on the ground. Films about Colorado will say “look at the beautiful mountains,” but they won’t show you the entire mountains that are being carved up and carted away by the mining companies.

We don’t make any claims of being experts on anything. We write about what moves us – both good and bad – and we describe things the way we see them. The descriptions of what we see will be tainted by our vision, which is a far better thing than being tainted by the vision of tourist bureaus, travel agents and corporate sponsors. The Truth may not always be pretty, but it’s better than bullshitting.

With that behind us, we’ve been bothered by something that’s been all over the local news. It’s been very dry out here, and the reservoir near Klamath Falls is running out of water. But there are endangered fish who live in the reservoir, so the government has forbidden any more water to be drawn until it starts to rain again. Some ranchers who use that water have gone to the dam, cut the locks with bolt cutters, and opened the flood gates themselves. Local police and sheriff’s deputies stood by and did nothing.

If Greenpeace, Earth First!, or any other group of environmentalists had come to the dam to close the gates on behalf of those fish, they would have been met with armies of police in riot gear. Every person within five miles would have been beaten, maced, and thrown in jail for weeks.

The lawbreakers who opened the floodgates are – in the eyes of federal law – environmental vandals on a grand scale; yet instead of going to jail, they go back to their homes. The cops stand around eating donuts while two species of fish struggle for mere existence. The hypocrisy of this situation makes our blood boil.

And while in a ranting mode (we haven’t had our coffee yet), let us say a few words about motel room tv sets. We wonder how much of our room rate is paying for these big color tv’s and cable connections that we never use. $5? $10? $20? A lot of these places charge by the minute for local phone calls, yet the tv and cable work perfectly, no extra charge.

We had one place tell us that local calls were a quarter, but the next morning we were billed over $6 for spending 50 minutes on the Internet (a local call). C’mon people! Skip the tv and give us a phone that works, and pass the savings on to us.

So with our tire fixed, we were ready to roll toward Coos Bay. Never wanting to go the easy way, we found a road called the Coos Bay Wagon Road. It’s worth the time and effort, but expect it to take an afternoon to cover what would be about two hours on the main highway. It’s winding, with lots of narrow blacktop stretches and lots of narrow gravel stretches; and it alternates between areas of logging activity and areas that seem to be protected. In some places the forest is so old and dense that the midday light level feels like late twilight, and every turn brings a new surprise in the form of waterfalls, rock formations and temperate jungles of moss and ferns.

Just as the traffic began to diminish, we found a roadside park called Iverson Memorial County Park. It was little more than a picnic table, primitive rest room and a hand-pumped well (the kind of place that Wisconsin would call a “Wayside”), but it was shaded by a mossy forest of uncut evergreen trees. It was a great rest stop before the challenging part of the drive. 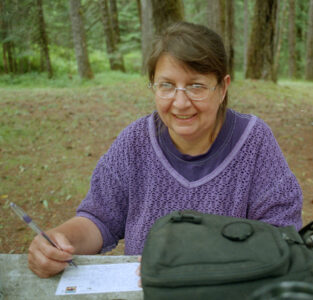 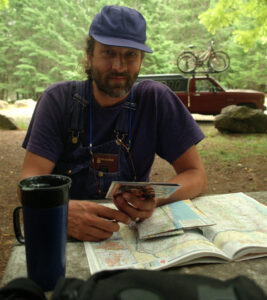 Obbie used the rest stop to study our corner of the Oregon road map. 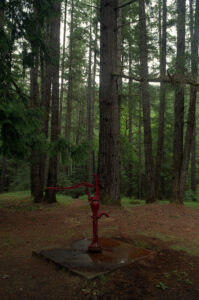 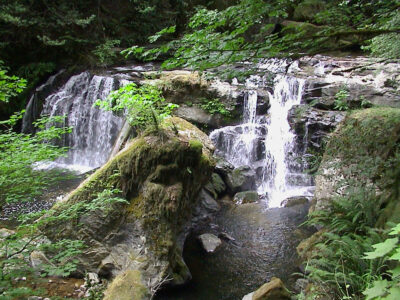 On the coastal slope of the mountain range, we found this waterfall in the midst of a dense and lush rain forest.

Our beloved correspondent quoted above will not approve of our bringing this up (though they shouldn’t be surprised, either), but we were disgusted by the clear-cutting we saw. Of course we knew it was coming, but the scale of this activity was not something we were prepared for.

Before we get criticized for being anti-lumber while living in a wooden house, we must emphasize that our problem with clear-cutting is not the mere harvesting of lumber, but that it is the wrong way to harvest lumber (unless, of course, you only care about maximizing profit with no consideration for the welfare of the forest itself).

We saw entire mountains lying bare. This is a dry year (as evidenced by the dry and brittle moss everywhere), so new plant life is having a tough time taking hold. If and when it DOES rain, expect to hear about lots of mudslides, because there is nothing left to hold the mountains together.

Late in the afternoon we emerged from the coastal rain forest and reached the coast at Coos Bay. Coos Bay is part fishing town (mostly oysters) and part logging/lumber center. It looks as if it’s seen better days, but a rebound is in progress as the vacant storefronts are becoming professional offices.

Coos Bay is also a harbor town. Lumber used to come from nearby mills to be loaded onto waiting ships. But now we hear tales of ships being loaded with fresh-cut logs. The unemployment surge in lumber country is not to be blamed on “environmentalists shutting down logging.” All those sawmill jobs are being shipped overseas on boats full of unprocessed logs.

Our main reason for going to Coos Bay was to visit Sage. Many readers of these long-winded posts remember Sage as Scotto, one of the two people responsible for RoZ and Obbie being together.

Roughly a week ago, we connected with Sage and met his sweetie Amanda for the first time at the Oregon Country Fair. He was a volunteer with the water crew, and we were running around like excited children, so our interactions were fleeting.

So we’re all looking forward to some quality time hanging out and catching up.

When we got to Coos Bay we were hungry, so we had dinner at a Mexican place while we waited. Sage met us on a motorcycle and escorted us to his place on the coastal side of the Coos Bay peninsula. Then we spent time hanging out and eating their landlord’s berries. On Friday night the four of us went to a deserted beach nearby and sat around a great bonfire we built out of driftwood.