Sage and Amanda set us up with an indoor space to sleep overnight, and the lack of a check-out time provided a chance to catch up on some well-needed rest. Coos Bay is an old harbor town built in the middle of an old lagoon. A shipping channel was carved through the barrier islands, turning north to form a peninsula around the town itself before reaching the main harbor on the east (inland) side of town.

Sage and Amanda live on the west side of the peninsula, near the harbor entrance. We didn’t have to go far from their back yard to do a walkabout along the waterside. It was refreshingly cool along the coast, which was a welcome change from the heat further inland. 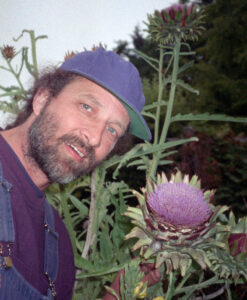 Obbie poses with the head of an artichoke in Sage and Amanda’s garden. 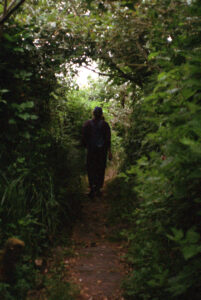 A passage carved through the greenery to access the waterside.

The shoreline of the harbor channel is littered with logs that failed to stay on their boats.

Our drive out of town took us along the channel until we met Highway 101. Leaving town required passage over a long steel bridge arching over the harbor, and some pictures to look back at the bay that gives the town its name. 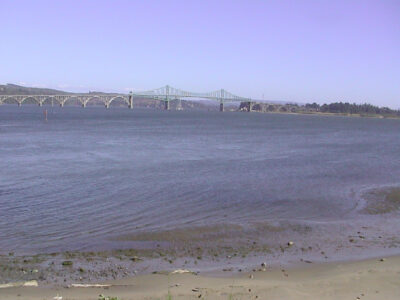 Coos Bay, and the Highway 101 bridge that crosses it. 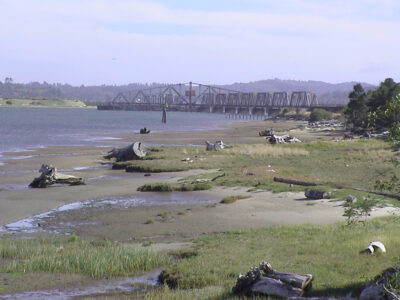 A railroad bridge remains “swung open” to allow marine traffic to pass, closing only when trains come through.

The drive from Coos Bay to Corvallis was memorably scenic. The Oregon Coast north of Coos Bay is known for sand dunes, most of which we saw from a distance, though we weren’t far enough away to escape the roar and whine of the dozens of dirt vehicles playing on the dunes. At any rate, the ocean meets the dunes which blend right into the forests, rivers, lakes and mountains.

In between the sand dunes we saw industrial saw mills, loaded logging trucks, and frequent clear-cuts. We noticed an effort to “hide” the clear-cuts from passing tourists: A few rows of trees near the highways are allowed to stand in hopes that passing travelers won’t notice the miles of stumps behind them.

Turning inland at Florence, we followed the Suislaw River as we made our way toward Corvallis. We turned onto a back road at Mapleton going to Triangle Lake, which was well worth an easy-paced side trip.

Our friend Heather is another La Crosse transplant who is now managing a boarding house in Corvallis. She is another person we interacted with at the Country Fair, but not enough. We arrived an hour after dark and she set us up on the living room floor. We’ll begin our proper visit tomorrow.