The crows at Lake Morena were still scolding us this morning as we packed up camp and headed toward Campo. From there we followed Cal-94 toward San Diego.

We stopped for lunch at the Potrero Cafe. It was your basic back-country diner food: enough food but not a lot, good enough but not great, and priced fairly for what it was. We were still in the remote boondocks, so there were no other choices unless we wanted to starve until we reached San Diego.

Not far out of Potrero there was a fork in the road, with the left fork going to Tecate. This is the only border crossing between San Diego and Calexico, but it’s relatively quiet. Tecate is best known for its huge brewery, but it’s a modest sized town that’s a much more pleasant dip into Mexico than Tijuana.

But we don’t have time for that today. We stayed on highway 94, which dropped from the high desert to the coastal plain as houses started getting newer and closer together. The road got wider and more freshly paved until it eventually became a freeway that brought us into the heart of the city.

We stopped at a park-and-ride in Old Town to ride downtown on the San Diego Trolley. This innovative system was started over twenty years ago by reclaiming nearly abandoned railroad tracks and hanging electric wires overhead for modern trolley cars. The system was built quickly and cheaply, and it is heavily used. In the afternoon (before commute hours) the trains ran every seven minutes and they were always mostly full.

When Obbie left the area ten years ago, the Trolley only had one line that went from Santa Fe Depot to the border crossing in San Ysidro. Since then a line has been added to the eastern suburbs, and another to the northern areas of the city by way of Old Town. We also saw a new commuter train called the Coaster that offered a convenient way to get to the string of beach towns to the north. 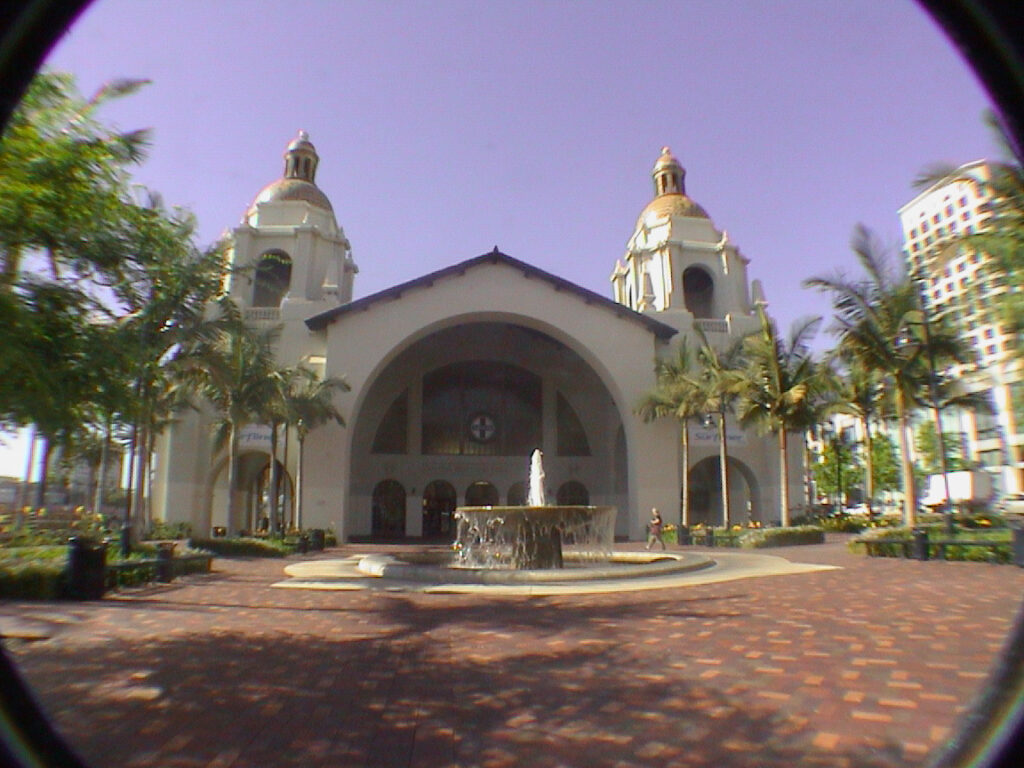 The Santa Fe Depot serves Amtrak, the Coaster and the San Diego Trolley from the heart of San Diego. 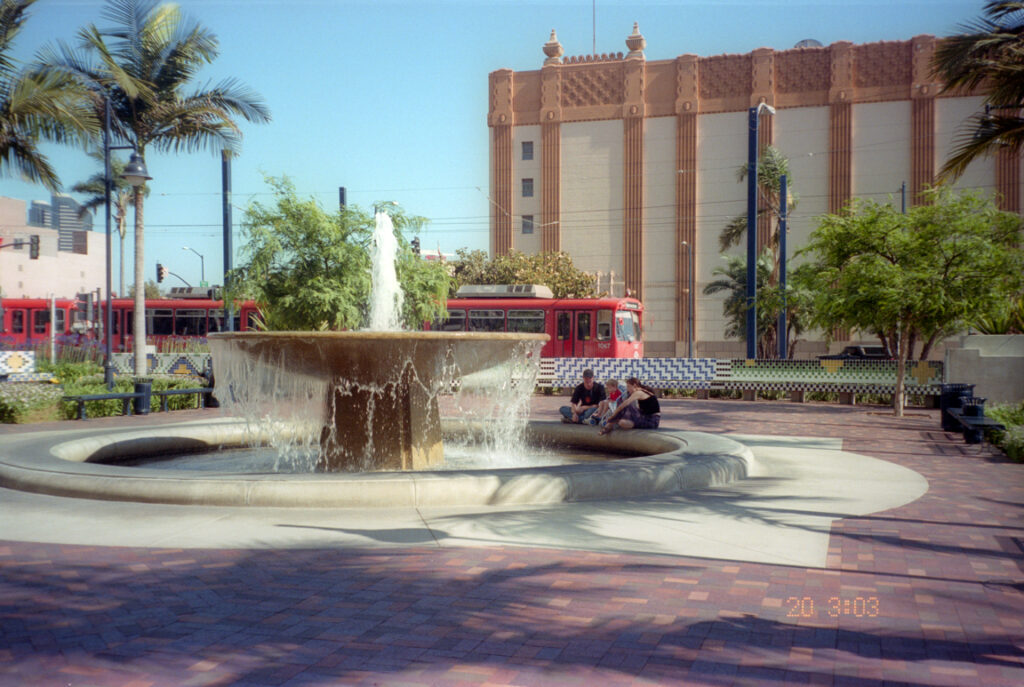 The San Diego Trolley passes the plaza next to Santa Fe Depot.

Ever since we got to San Diego, the weather has been cool again, but still dry. In fact, San Diego was occasionally downright cold today … for about five minutes until the sun came out, making it warm again.

We returned to Old Town (and our truck) on the Trolley and drove to Ocean Beach to restock on groceries at the Peoples Food Coop. Eventually we were rolling north on the remnants of the Coast Highway, going through urban beach neighborhoods and suburban beach towns.

An hour north of San Diego, the road gave us a choice: Get on the freeway (I-5), or go through the entry gate to Camp Pendleton Marine Base. We chose the freeway, and enjoyed about fifteen miles free of billboards, strip malls, or residential sprawl. The marines occupied a big corner of the county, and didn’t allow much of anything to be built on their base close to the freeway, so we drove in city traffic (four lanes in each direction) with the ocean on one side and wild hills on the other.

At the end of it there was a checkpoint. The border patrol maintains a series of checkpoints about fifty miles north of the border. Most people simply get waved through. Others get asked a few questions, and anyone who the officers deem “suspicious” may get pulled into a special area for a closer look.

Once clear of the checkpoint we passed the San Onofre Nuclear Power Plant, right between a popular surfing beach and the property where Richard Nixon once lived. Nixon’s place marked the beginning of San Clemente and Orange County, and a few exits later was the beginning of Route 1 in Dana Point.

The plan is to follow Pacific Coast Highway for as long as it exists, which will take us far into northern California. As it got dark, we passed through more beach towns: Laguna Beach, Newport Beach and Huntington Beach. It was in Huntington where we found an affordable motel with a vacancy, where we called it a night.