We woke up in the Lake Hemet campground to the sounds of motorboats & leaf blowers. Our night was spent resisting our bodies’ urge to slide downhill toward the foot of the tent. The sites looked level, but the entire campground sloped gently up from the lake shore.

It took about an hour to get to Temecula. On the way, we passed high desert covered in sage, chaparral, red shank and manzanita. This was the rain shadow of the coastal range. Temecula was once a little frontier town on US-395, but when I-15 was built it brought commuters and their cookie-cutter houses sprawling across the landscape in all directions.

It was time to get gas, which is very expensive here. So far we’d been paying around $1.70 to $1.80 for a gallon of gas, but here in California it’s well over two dollars.

To get to Fallbrook, we were forced onto the freeway for a couple of exits. We went over a mountain pass and suddenly everything got green again. This side of the coastal range was covered in neat rows of avocados, citrus, grapes and other fruit.

When Obbie lived at a southern California commune, he would regularly visit George, an organic fruit grower near Fallbrook who grew the “usual suspects” for this region (avos and citrus) along with stone fruit (peaches, apricots, etc.), persimmons, and “exotics” like sapotes and cherimoyas.

We were pleased to find that George was still growing and that we were able to visit and explore his grove. He now has small greenhouses where he’s experimenting with growing tropical fruit. We bought as much fruit as we can use before it spoils, and headed down the road for our next stop. 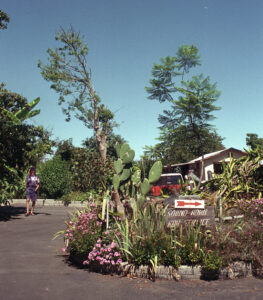 The entrance to George’s farm near Fallbrook.

Obbie relaxes under a sapote tree in George’s orchard. 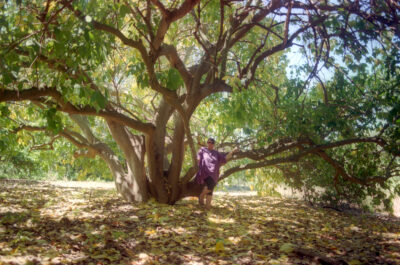 Rozie leans on the limbs of a sapote tree in George’s orchard.

After passing miles of commercial orange groves we climbed to near 5,000 feet and found the town of Julian, which is known for apples. You can find any climate zone you need in this area by finding the right elevation.

Eventually we arrived in Boulevard and visited the property on Tierra del Sol Road that had been Zendik Farm from 1986 until 1991. Obbie gave Rozie a tour of what had been his home for five years. The swimming pool that he dug and built by hand is still intact and in use. We chatted with the current owners, and Obbie answered questions they had about the artwork that was embedded in the property.

Our plan for tomorrow is a day in San Diego, so we need to get closer before nightfall. We found a campground at Lake Morena County Park north of Campo. Relaxing at our campsite before turning in, we fought with ants and grickle grass and were scolded by crows.