This morning we limped down the hill from our campsite in San Simeon State Park, hoping that our pressure-starved tire will get us to a repair shop close to a good breakfast place before it bottoms out. We made it to a Chevron station in Cambria, and we left the truck there while we looked for breakfast.

The Cambria Cafe specializes in Mexican food, so we had a chile omelette and an order of huevos rancheros. We were especially pleased with the home fries that came with our meals. It was a good thing we were relatively early, as the lunch crowd appeared while we were there and seemed to overrun the place.

When we got back to the repair shop the truck was ready to go, so that’s what we did. Today’s drive is widely regarded as one of the most scenic drives in the world. Route 1 clings to the cliffs high above the ocean, occasionally winding into a canyon to cross a stream and wind back out to hug the cliffs again. The entire road was intact, but with earthquakes and mudslides it isn’t always so.

We feared that, being Fourth-of-July week, the road would be choked by rolling condos and land yachts. Happily, traffic was light since we were going south-to-north while most traffic seems to be north-to-south.

People like to travel that route southbound because the vista points overlooking the ocean are all on the right, and the view of the coast is more “full.” Be warned: it takes at least 3 hours to cover this section of road, and there’s not a lot of margin of error between the twisting blacktop and the rocky shores hundreds of feet down. 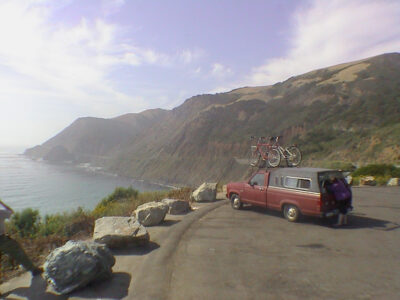 The Big Red Dog rests at a viewing area along Route 1.

Route 1 hugs the cliffs over the Pacific Ocean in California. 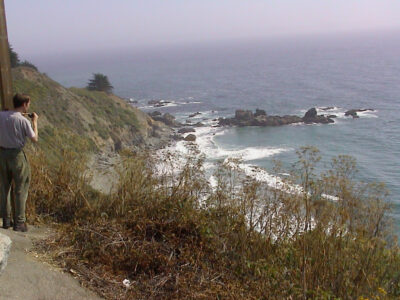 Looking south from the cliffs overlooking the Pacific Ocean near Big Sur. 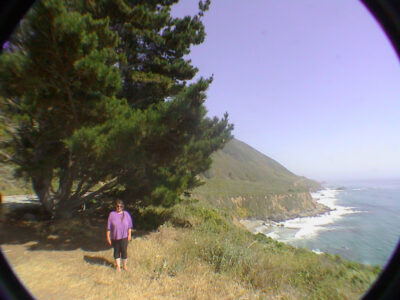 Rozie comes out from under a shade tree along Route 1 on the Pacific Coast.

South of Carmel we took a break to walk to the beach and touch the ocean for the first time (something we hadn’t gotten around to this whole time) at Garrapata State Beach. It was late in the afternoon when we were back on the highway for Santa Cruz. 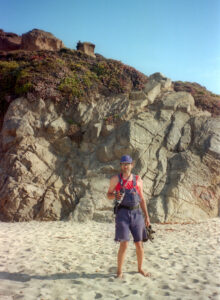 Obbie stands in the sand at Garrapata State Beach, near Carmel CA.

We got there just before dusk and contacted our friend Martin. Rozie and Martin worked together in radio production when they lived in Kansas City. He had visited us in La Crosse a few months ago and was expecting us on our return visit. We sat down for Thai food at a place called Sabieng until Martin showed up with his sweetie Vicki.

After dinner they took us on a walking tour of downtown Santa Cruz and set us up with a campsite at Bob’s Pine Grove. There would be plenty of time to catch up tomorrow.

Late that night we were sitting up having a beer when suddenly, out of the blue, came this very interesting bird sound. Then we noticed the sound kept changing, and it didn’t move. This was odd. We got closer to the sound and couldn’t scare it, and couldn’t get it to shut up.

Maybe it’s a good thing that some neighbor had a house alarm that made bird sounds instead of alarm sounds. But as annoying as it was to us, it wasn’t annoying enough to encourage someone to turn it off.