Pacific Coast Highway (PCH) had some surprises as we left Orange County and entered Los Angeles County. We saw an offshore oil platform early, and quickly found ourselves in Long Beach, passing one oil refinery after another. The air smelled weird and toxic until we turned north again. Even though all the towns here seem to have names that end with “beach”, that doesn’t necessarily make them pleasant.

Coffee and lunch came in the form of a Thai buffet in Hermosa Beach. Lunch buffet was $7, the food was excellent, and it was good to experience an Asian buffet that was different.

We’re experiencing a bit of culture shock with California driving habits. Time was that roads here were fast and crowded, but orderly. Not any more. A lot of behavior that used to be confined to the East Coast has found its way out here. For example, when lanes merge, it used to be that the cars in the merging lanes would politely take turns getting in line. Now you have people swinging around the outside to cut in line, and they always seem to be driving Yukons or Expeditions or some other rubber-tired tank.

In Venice, PCH is known as Lincoln Boulevard, and it’s about a mile from the actual beach. We parked the truck a few blocks toward the beach and set out to explore the area on our bikes. Obbie’s bike had a leaky tire, so the first stop was a bike shop to get that fixed.

Once we were our way to the beach, we passed through the Venice canals, a widely overlooked and forgotten feature of this community. The construction of the canals in the early 20th century was an attempt to recreate Venice, Italy in California. When cars got popular, many canals were filled in and turned into streets. In recent years the remaining canals have been cleaned up and revived, and they’re now a great place to wander about in a canoe or a small boat, or you can walk or bike on the sidewalks on either shore. 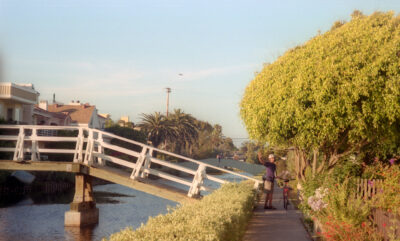 Obbie waves to the camera from the end of a footbridge over a Venice canal. 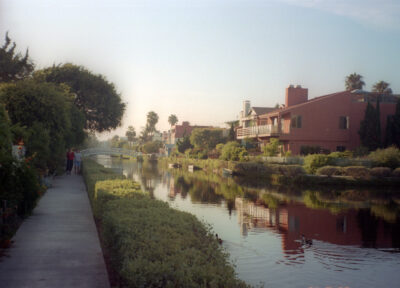 Looking the other way at a canal in Venice, California.

Many of the “streets” in Venice are sidewalks (the cars use the alley). 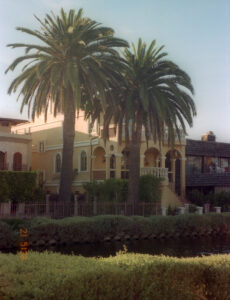 A “simple home” along the canals in Venice, California.

The Venice Boardwalk is not really a boardwalk. It’s more of a paved street that separates the public park and beach from private real estate. It’s where you find the weightlifting club (aka “Muscle Beach”), performing skateboarders, busking musicians, and all kinds of street vendors. There’s a strip of grass between the boardwalk and the bike path, which snakes its way along the beach to the other side of Santa Monica.

We got some exercise riding on the bike path as far as we could before turning back. On our way back to the truck we visited the Santa Monica Pier, where we could watch the traffic from I-10 flowing onto PCH. It looked like we would need to kill some more time before the traffic on PCH became bearable.

This part of Santa Monica sits on top of a cliff, with PCH between the foot of the cliff and the beach. Between the top of the cliff and Ocean Avenue is an iconic strip of parkland which is popular among runners who wish to be seen. We made note of the intersection of Ocean Avenue and Santa Monica Boulevard, the western end of what was once Route 66.

Eventually we got back to the truck, loaded our bikes onto the roof rack and found our own way onto Pacific Coast Highway. Before we passed from Pacific Palisades to Malibu, we turned into the mountains to visit Topanga.

The Zendiks (and Obbie) lived at a place in Topanga for a couple of years in the early 80’s, and we were pleased to see that everything he built survived the fires and earthquakes of the last 15 years and remains standing. 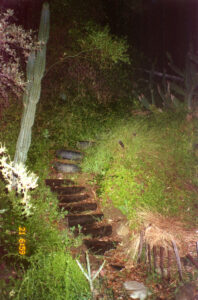 A stairway made from repurposed tires, built by Obbie in the early 80’s in Topanga.

Obbie’s most lasting contribution to the property was a series of rock-wall terraces he built on the hillside, which were now hidden under the overgrowth, but they were obviously still there.

An interesting observation from visiting old homesteads was to see how a place evolves as it is refined and adapted by successive owners. This was especially true of the Topanga place, which is on at least its fourth owner since Obbie lived there.

It was getting late by the time we were on PCH again, driving through Malibu. We started looking for a room as we got to Oxnard but it wasn’t easy to find one. At the Regal Motel, we got a $15 discount on a room… “I haven’t had a chance to clean it yet, but it’s only needs a very minor cleaning. One of the beds wasn’t even used.” We took a look, and yeah, we were willing to live with it. We were too tired to continue searching.

After a day of traffic stress, we reminded ourselves how there are people who deal with this mess for an hour or more each way, EVERY DAY! With that much stress, it’s not surprising that they were shooting each other for a while. We are proud to say that we made it thru the entire LA area (Orange and LA Counties and beyond, from San Clemente to Oxnard) without setting tire on one freeway. The roads we were on were crowded, frantic and stressful enough.