A note from the “you get what you pay for” department: We spent $30 on our room in Kingman, so our room had the loudest air conditioner in the state, and the bed was a “canoe” bed. And as we head on down the road, it looks like every room in this town is less than $30.

A few days ago we were in Gunnison, Colorado, which frequently records the coldest temperature in the country. Kingman is frequently the hottest place in the country and Needles (our next stop) is another regular winner of that distinction.

We followed “Business I-40” through Kingman, which is also known as “US-66”, and it’s lined with old art-deco motels from the days before the freeway was built. Facing a hot day driving across the desert, we stopped at a grocery store to fill our cooler with fresh ice.

We didn’t take this trip to follow the Interstate, so we embarked for Needles on old Route 66. Signs point out that tractor-trailers are “not advised,” but there was a time that this gnarly little road was the only way to get between Flagstaff and Barstow, no matter what you were driving. It was narrow – even for a two-lane road – and the pavement was cracked and weathered.

After many miles of flat and featureless desert, we started to see more color and variety to the landscape. There was nothing out here, but the remnants of an ancient gas station provided a good-enough stop for a potty break. The stop was not as brief as we expected, as other travelers (most on motorcycles) stopped by for the same reasons. 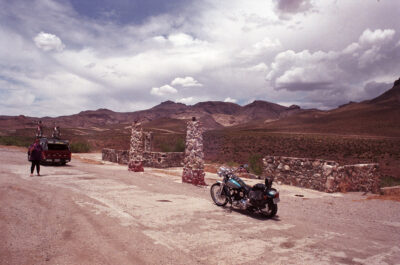 We parked at the remains of an old gas station on Route 66, and a motorcyclist stopped to join us. 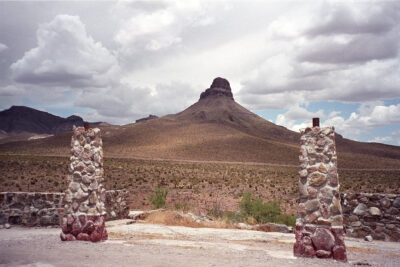 Stone work from an old gas station frame a nearby peak on Route 66.

A panorama of the desert as seen from this old gas station on Route 66.

Once we got moving again, we moved through a group of mountains (I-40 goes around these mountains, US-66 goes through them) and made another stop at the crest. The air was crystal clear, though we could see a bit of haze on the far horizon… evaporation from the Colorado River, still many miles away. 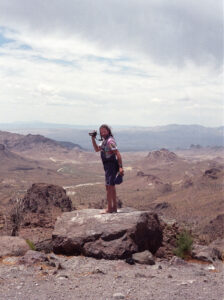 Obbie surveys the road ahead of us from a mountain crest on Route 66. 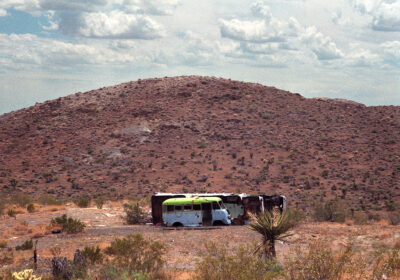 As we came out of the mountains, we came to the tacky little tourist town of Oatman. Their “thing” is allowing mules and donkeys to prowl the streets, but everything else looked like a Hollywood set (for all we know, it once was) overrun with cars and polyester-clad tourists (where did all these people come from?). 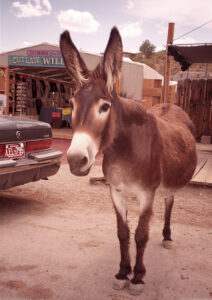 One of Oatman’s permanent residents greets us as we drive through town. 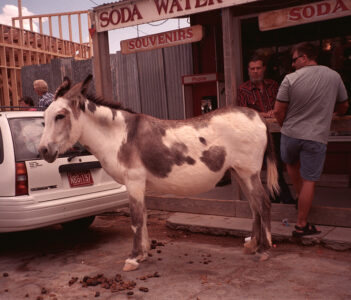 Donkeys and mules were a novelty in an otherwise tacky town.

With no reason to stop, we pressed on toward Needles, getting there about three hours after we’d left Kingman. This was another town with lots of cheap ($20-30) motels, as well as lots of car repair shops (people famously break down in the desert, and towns are 50-100 miles apart), but very few food options. We found lunch at the Burger Hut, and old drive-up food stand with shaded outdoor seating. Their menu had multiple vegetarian options, and the quality was decent for this type of place.

Our preference was to cover the drive from Needles to Indio at night to give our truck and ourselves a reprieve from the oppressive summer desert heat. The gremlins that messed with our schedule had other ideas. After about a half-hour, the novelty of the desert started to wear off, so Rozie napped through most of the monotony of the drive to Desert Center, where we were forced onto Interstate 10.

The next exit was onto a road that our map said would bring us into the Coachella Valley, just north of the Salton Sea. It turned out to also be a change of scenery, as we wound through grey mountains with nearly non-existent plant growth. We pulled over to take a break at a place we ended up calling “the moon.”

A panorama of our rest stop on “the moon.”

When we left the moonscape, we were presented with carpets of green irrigated land leading down to the Salton Sea. The Salton Sea is the result of a monumental screw-up at around the turn of the Twentieth Century, when canals to provide irrigation water to the Imperial Valley were breached, and the Colorado River flowed into the bottom of this deep valley (250 feet below sea level) for a couple of years before it was stopped.

Since then, irrigation run-off supplied enough water to make up for evaporation, but the salinity (the land was already a salt flat) kept increasing to the point that almost nothing can live in that water any more. The orange groves and tomato farms we passed seemed quite out-of-place in this unforgiving environment.

One crop that is suited to this environment is dates, and once we got onto California 111 we saw a lot of date palm plantations (groves? farms?). This is where most American-grown dates come from, and we stopped at the warehouse of an organic date wholesaler in Coachella to get some.

We have begun the part of the trip where Obbie gives Rozie a tour of his old backyard from his time in California between 1978 and 1991. A back-road side trip from Indio passed some places he once lived in Thousand Palms before we turned south on Bob Hope Drive toward Palm Desert. After a long hot day, we were so done with the desert and eagerly climbed toward the switch-backs that would bring us to a higher and cooler elevation.

Pines to Palms Highway is an iconic road that’s featured in many car (and truck) commercials. It’s also where Jimmy Durante “kicked the bucket” in “It’s a Mad Mad Mad Mad World.” From the view point on the top you can see a strange pattern in the landscape, where half the sections (square miles) were reserved for Indigenous and the others were occupied by white settlers (and their heavily watered golf courses). All the water went to the “white” sections, leaving the desert looking like a green and brown checkerboard.

It was getting late, so we headed down the road and set up camp at Lake Hemet. It was still warm, but cool enough to get a good night’s rest near an artificial lake.