Our low-priced room in San Bruno was a perfect launching pad to spend the Fourth of July in San Francisco, mostly on a tour of Haight Street and Golden Gate Park. To get there, we took El Camino Real toward the city until we found Route 1 again. Just before the road goes through the park, we turned onto Judah and parked a few blocks down.

This is why we carried our bikes. It’s expensive and stressful to park near interesting places in big cities. But free on-street parking can be found in residential neighborhoods a mile or so away… a distance that might be unrealistic to walk, but just a few minutes by bike. Today our bikes took us through Golden Gate Park to Haight Street.

Breakfast was still on the agenda, and Obbie’s favorite place here is The Pork Store. Unfortunately, it’s also everybody else’s favorite place given the long line for a table. We didn’t have time for that, so we opted for the Peoples Cafe a few doors down. This was more of an “order at the counter, we’ll bring your food when it’s ready” kind of place, but the food was still good. There were many vegetarian options for omelettes, and the home fries were awesome. We’re still not used to California prices.

Haight Street businesses seem to be engaged in a competition for the most psychedelic and/or artistic storefronts, and there are some classics there. What was once a low-rent hippy enclave has seen a lot of fresh paint and high-end remodeling, and the people who made the neighborhood interesting can no longer afford to live there. 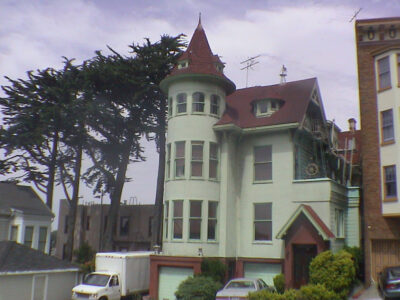 When on Haight Street, we recommend Buena Vista Park. It looks like a little pocket park from the street, but if you start climbing the trails and keep climbing, you will be rewarded with grand vistas of downtown and the northern parts of the city.

Golden Gate Park is packed with museums, botanical gardens, and other special and unique places found in most major city parks. We spent a couple of hours in a part of the park devoted to Asian art. We hung around a spectacular 1930’s bandshell and music concourse, then walked thru a Japanese Tea Garden.

At the Tea Garden, they have free admission for the last hour of operation each day, and we got there just as the ticket-taker called it a day. The place is an Asian maze where one could easily get lost. There are several pagodas, plants of all kinds, ponds, paths, sitting areas, and sculptures, including a ten-foot eighteenth-century bronze Buddha. In the center of it all is the Tea House, where you can sit down to one of several varieties of tea, all complimented by cookies and snacks.

Our truck was just a few blocks from the Tea Garden, and we wanted to take a quick peek at some other parts of the city on our way out. We drove through the Mission, then tried to do a drive-thru tour of Chinatown and North Beach, but became engulfed in traffic as the hordes converged on the bay shore to watch fireworks. We ran away from the crowds and dashed across the bridge. 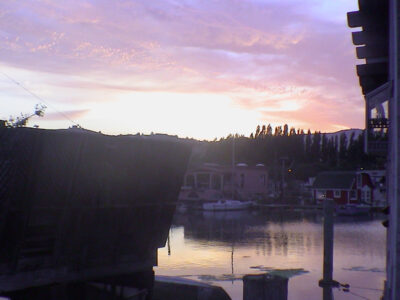 The sun settles low in the west as seen from the house boat area of Sausalito.

We made a quick stop in Sausalito to check out the houseboats. Back in the 60’s, a bunch of hippies and slackers started living in houseboats near Sausalito because, hey, there’s no rent to pay. The local curmudgeons started a movement to get rid of the houseboats, since they didn’t “look good” next to their million-dollar homes.

As the sun went down and we looked for a room, we were puzzled by a paradox of holiday crowds. With so many people flocking to the city, one would think there are places that are not crowded. But the remote places away from the city are overrun as well. It seems the suburban and rural people go to the city, and the city people leave town. And everyplace is crowded.

We finally found a room we could afford near Novato… a bit further out than we’d planned on going, but still close enough for the things we hope to do tomorrow.