The wine we had last night was tasty, but it left Obbie badly hung over. The noisy neighbors in the campground didn’t help. At any rate, today is a day that Rozie does most of the driving.

We took state Route 20 over the mountains to Willits to re-join Route 101. During lunch at a Chinese buffet in Willits, the owner discovered that his date-of-birth is only three days from Obbie’s and exclaimed, “we brother!”

101 through Willits was a major traffic jam, but it started moving again as we got out of town. Near Laytonville we stopped at an art shop that had beautiful batiks as well as artwork by Wavy Gravy.

An hour or so later we found the “Avenue of the Giants”. This is a stretch of the original highway that goes through the ancient redwoods, including an iconic spot where the road tunnels through a redwood tree. But there was a posted height limit. If we removed our bikes from the rack on the roof, we would still be close to the limit.

We are learning that most of the redwoods are relatively young, having sprouted after the first clear-cuts over a hundred years ago. A few pockets of old-growth remain in parks and reserves, but even century-old redwoods are impressive.

As 101 was just getting back to the coast south of Eureka, we turned back toward the mountains on state highway 36. Our map said that this road could get us to Redding and the road to Mt. Shasta. The signs said that taking big trucks over the mountain was not a good idea, but we have a small truck, so we’re OK.

Before we got very far, we found a campsite at Grizzly Creek Redwoods State Park, so we pounced on it. We fired up the camp stove to make some corn pasta, which we enjoyed with pasta sauce and cheese. 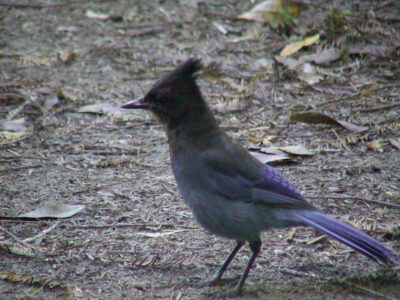 There was a bluejay near our camp kitchen that was determined to share our meal with us. It was a very obnoxious bird, probably a messenger from Ariel, our lovebird at home who was very pissed off that we’ve been gone so long.

We were there early enough to make friends with some of our campground neighbors, and to walk around enjoying our presence in a dense and deep canopy of redwoods.