After we made breakfast for ourselves at our campground in the redwoods, we took a walk around before we hit the road. Along the way, we met and had a chat with a very interesting old guy. He was on the crew of a bomber in World War II, got shot down in November of 1942 and spent the rest of the war in the same Stalag that was the source of the story for the book and movie “The Great Escape.” He said to look up “303 bomber group”.

To paraphrase the warning signs at the beginning of this road, “If you have a long trailer, you’re gonna be really sorry if you try to go over the mountain on this road.” They weren’t kidding. The climb and the descent were steep, the turns were gnarly, and the road itself was quite narrow in spots. But it was also one of the most scenic drives of our trip.

Once the road on the downhill side widened out and became a highway again, we took a rest stop at a pull-out and found a picturesque stream with a natural log-dam forming a small pond behind it. It was a great place to enjoy the cool air of the early afternoon, because it was very hot once we got to Redding. 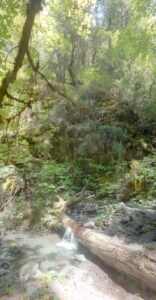 A stream emerges from a mossy forest west of Redding. 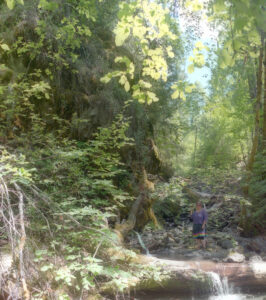 Rozie cools her ankles in this mountain pond west of Redding 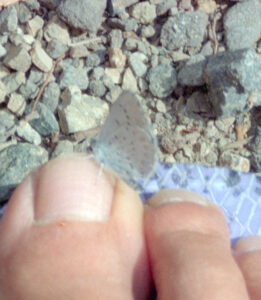 On our way back to the truck, a butterfly was interested in Rozie’s toe.

Searching for coffee, we somehow ended up in a downtown shopping mall that was deserted. There was very little foot traffic, most of the store fronts were either vacant or had been transformed into low-rent office space, and the air conditioner setting were totally inadequate for the day’s heat. It felt like a ghost town, and it was kind of sad knowing that this failed mall was probably built in an attempt to save a failing downtown.

We did get well-fed in Redding at a Mexican place called La Cabana. The food was good, it was delivered promptly, and filled us up in spite of our ravenous hunger.

Late afternoon was transitioning to early evening when we left Redding, and our plan was to camp at Mount Shasta tonight. If we were going to get there before dark, we’d need to use the freeway (I-5), and it doesn’t look like there are any parallel alternate routes anyway.

We got to the volcano (yes, Shasta is a volcano) at about sunset and camped at the McBride Springs campground in the national forest. At 5,000 feet, it’s a good place to acclimate to the elevation, having been close to sea level the last several nights. We ended our day relaxing as we gazed at a sky shimmering with brilliant stars.