Today’s mission is to replace Obbie’s glasses. Fortunately, we’re carrying a copy of his prescription, and Berkeley is among the best places on our route to find discount eyeglass dealers.

We know of a route over the mountain between Bolinas and Fairfax, and there’s a road that follows the top of the ridge from our campground to meet it. Then it was a long and twisting mountain road that took us through remote back country until we started seeing older but well-kept homes. We were back in “civilization.”

Fairfax was once the last accessible settlement in Marin County before the mountain terrain made commuting unrealistic. The mountains seemed to have stopped the sprawl, but they haven’t stopped the money from moving in. We continued on through San Anselmo to San Rafael, and got on the freeway to cross the Richmond-San Rafael Bridge… or, from this side, simply the “Richmond Bridge”.

As soon as we were on the freeway we heard a new noise coming from under the truck. It felt like we were driving on rumble strips and we started to freak out. This noise followed us past San Quentin Prison, over the Richmond Bridge (5 miles on the lower deck) and past the warehouses and oil refineries of the North Bay. Pleasant trip.

When we got to Berkeley, the first thing we did when we got off the freeway was to visit another place that Obbie once lived. Where the bottom (western end) of Dwight Way dead-ends at the railroad tracks is a place once playfully called the “Berkeley KOA”.

Obbie’s step-van was among three or four vehicles that were clandestine residences clustered in that neighborhood in the winter of 1991-92. The grungy warehouses are now cleaned-up office buildings, and a parking lot is now the site of a new and shiny office building. The neighborhood has definitely scaled up.

We went up the hill, parked the truck and had breakfast at the corner of Telegraph and Dwight. The place is called The Soup Kitchen, and it’s another eatery with no table service: order and pay at the counter, and wait for your name to be called. In spite of the name and the style of service, it was one of the best breakfasts we’ve had on this trip, and probably the best price we’ve paid for breakfast since we left home.

We were put off by the crowds on Telegraph, and we couldn’t find a glasses place there anyway. We finally found a place on Shattuck that would set us up with a pair of regular glasses and a pair of photo-greys for fifty bucks. “Come back in an hour.”

Prescription sunglasses will be an upgrade. So far, Obbie has been forced to “double up” his regular glasses with a pair of generic sunglasses, an ugly and awkward arrangement. 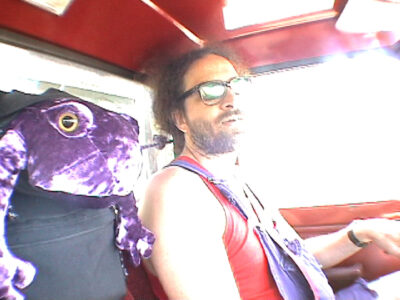 Before: Obbie was forced to combine sunglasses with regular glasses. 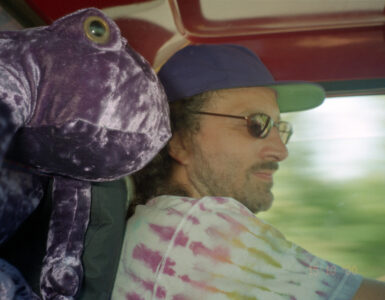 Once the glasses were delivered and paid for, we rumbled northbound out of Berkeley and picked our way through the Friday afternoon commuter mess to wine country. We weren’t necessarily interested in that region, but we had to pass thru on our way to the North Coast redwoods. We passed mile after mile of grapes, all irrigated. It’s amazing how much California tries to do with imported water.

We had our sights of some state park campgrounds on our way, but they were all full. We ended up spending the night camped in Calistoga, a hot springs town in the middle of wine country.

They seem to be accustomed to an overflow of campers, so we were directed to the Calistoga Fairgrounds. We shared a patch of grass and a parking lot with two or three other couples.

It’s level and quiet, and there are decent showers. Nothing to complain about, as we look forward to a restful night.