We were the last people to leave the Calistoga Fairgrounds, and we went to find coffee before leaving town. We had an outdoor table at a place downtown, and the overheard conversations were liberally sprinkled with the words “hot tub” and “wine”. This atmosphere of polo shirts and sun hats was not to our tastes, so we eagerly headed northwest on Route 128.

Have we mentioned yet that great coffee is much more widely available than it is at home? This is good news for us coffee lovers, but it seems to exacerbate the bad habits of drivers that already are in too much of a hurry.

128 shared pavement with 101 as we approached Cloverdale, where we had lunch at Taqueria Paraiso, a quiet Mexican place in a converted dance hall. It was the most authentic Mexican place we’ve eaten at so far, and the prices were very reasonable.

As we left, it occurred to us that the Taqueria was there for people who worked in the nearby vineyards, while the wine gawkers went to far more upscale places. It was quiet when we were there, but it’s likely that it’s much busier in the later hours, after the day’s picking and pruning are finished. 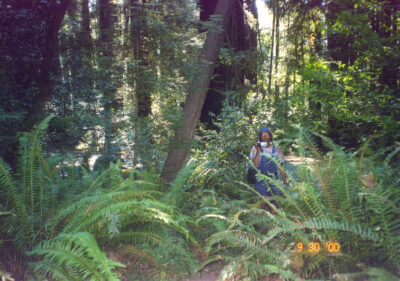 Obbie and our camcorder peek through the ferns near the organic apple orchard we discovered on Route 128.

Route 128 from Cloverdale to Mendocino is a highly underrated drive. Mountains of oak savannas alternate with mountains of redwoods. Near the crest of the coastal range, we found an organic apple farm with a stand that sold us apple juice and cider on an honor system.

Mendocino is an old fishing town that retains a lot of the old look. When the houses were built, they each had private water towers and windmills, and many of these old water towers remain.

A view of the Mendocino “skyline.” 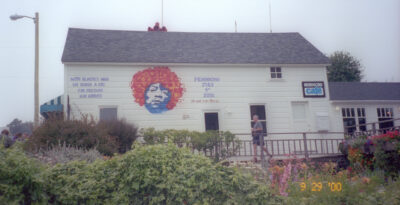 Paintings on the wall of the Mendocino Cafe commemorate a celebration just days earlier. 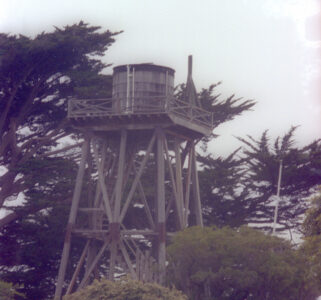 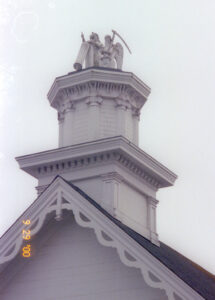 The top of a bank in downtown Mendocino. 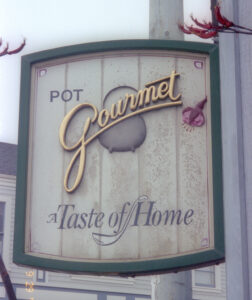 The menu of this Mendocino restaurant does NOT feature the dominant local agricultural product.

We were in town to make a pilgrimage to Lark in the Morning, a music store that sells every odd-ball instrument known to humanity. There were hundreds of different stringed instruments, but none of them were tuned. (Can you imagine having to tune all of these instruments, with each one having its own special tuning?) We ended up getting a couple of hand drums and a whistle without breaking out of two figures. Amazing place.

We set out in search of a campsite in the state forest, but all of them were full. We ended up at Camp Wildwood, a private campground about four miles inland from Fort Bragg. We shared a bottle of Sonoma County wine we’d picked up in Calistoga, and relaxed while listening to the fireworks show in Fort Bragg.