While we were still in our room in Novato we made phone calls to campgrounds in search of an opening for tonight. Mt. Tamalpias State Park had openings, but it’s first-come-first-served, so we jumped in the truck to go up there right away. We took a little drive-thru tour of Mill Valley, then made the steep and winding drive up Mt. Tam to the Pantoll Campground. I think we were in the Muir Woods National Recreation Area, but the border between Muir Woods and Mt. Tam State Park is kind of blurry.

With our camp site for tonight secure, we drove down the other side of the mountain to Bolinas. Bolinas is a cool little coastal fishing town about 20 miles up the coast from the Golden Gate Bridge that recently evolved into a hippy town.

Most maps show that you have to take a little side road from Hwy 1 to get there, but finding that road is a trick. Back in the 80’s, the highway maintenance people had a hard time keeping the signs up that directed drivers to Bolinas from Hwy 1. There were (and are) people in Bolinas that are so determined to keep their town from being overrun by tourists that the signs would be gone minutes after installation. The highway people even tried painting the direction sign on the pavement, but that also disappeared. Finally, CalTrans officially gave up on maintaining that bit of signage.

Having found Bolinas, it hasn’t changed much in ten years. We had brunch (fish & chips and cheese enchiladas) at the Coast Cafe. The staff was very friendly, and we had long chat with owner.

He talked about his tipping policy: all tips are shared by all staff on duty, so everyone – from waitstaff to dishwashers – is motivated to make all customers happy, even if it’s not “their table”. He also talked about wanting and needing the place to be a hit with the locals, since Bolinas doesn’t get enough tourist traffic to survive on.

After lunch, we restocked on some supplies, and took a short walk. Unfortunately, Bolinas was where Obbie lost his glasses, which spoiled what should have been a very pleasant drive back.

We got back up the mountain by late afternoon, and had time for a hike through Muir Woods National Monument. We accessed the trails from our campground, and they were as steep and dusty as the Grand Canyon trails, but they wound thru groves of old-growth redwoods. We found trees we could walk thru or hide in, and some trees that were over a thousand years old. It did look like the recent years of drought have taken their toll, as the forest seemed very dry. 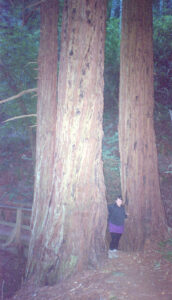 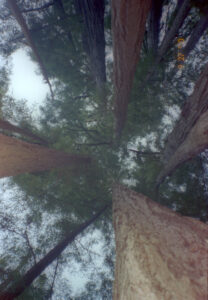 Looking up into the treetops at Muir Woods National Monument.

As we tried to drift off to sleep that night, we were distracted by the sound of a female voice with a European accent repeatedly calling out, “Hallo?… Hallo?” Maybe she’s looking for a ranger? Or did she become disconnected from the rest of her group? Should we feel guilty for not squirming out of our sleeping bags, getting dressed, and talking to her? Even though there was little or nothing we could do to help?