During the darker hours of the night, the hissing and droning of traffic noise from the other side of Lake McDonald was less continuous. Occasionally a vehicle would make its way along the lakeshore, and we’d listen as the sound migrated from one end to the other.

Before hiking out in the morning, we spent some time wading into the lake and checking out rocks. It took a few hours to get back to the truck, and we observed some of the advice we got from the bear drill: make noise. Bears don’t like being startled or surprised.

So to alert the bears, harmonicas were played. We would march along humming songs like “Teddy Bear’s Picnic.” Since we were in Montana, the lyrics to Frank Zappa’s song “Montana” were recited. Eventually the idea of becoming a dentil floss tycoon gave way to navigating a pock-marked jeep road back to the paved highway.

We went about a mile past the loop before we found a safe place to turn around and return to West Glacier. If we were to continue, we’d have gone over a high mountain pass and found ourselves on the plains. We weren’t ready for that. 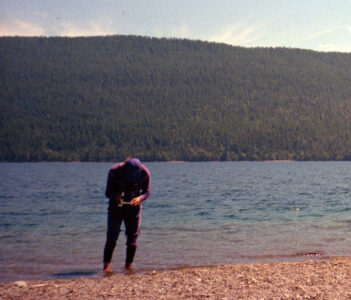 Examining the rocks near the shore of Lake McDonald. 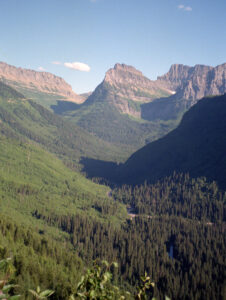 Many parts of The Road to the Sun can be seen from near The Loop. 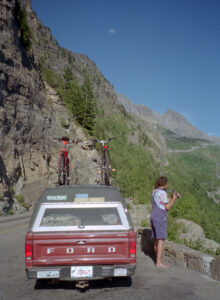 Viewing Glacier National Park from our turn-around point on The Road to the Sun.

As we started down US 2 out of West Glacier, we noticed that at a certain speed the truck was shifting back and forth between 2nd and 3rd. We checked the transmission fluid while we restocked on gas and ice, and it looked ok. We continued on reassured, but concerned that the Big Red Dog was not the same truck it was when we entered the park.

We turned south toward Missoula, and just as the sun was setting we found a place to eat dinner called Mountain Crossroads. It’s the clubhouse of a golf course, and it was filled with smokers. Fortunately, there were a few tables were outside, where we could enjoy our dinner while watching night fall over the golf course. We were pleased to find a few vegetarian options on the menu. There wasn’t a lot of food but there was enough and it was tasty. It was a nice place considering it’s the only place for miles.

Our route to Missoula would have to go around Flathead Lake. Flathead Lake is the largest natural fresh-water lake west of the Mississippi. The well-beaten path follows the western shore, so we went down the eastern shore. The fading twilight gave us a good look at the lake from the north end.

As we drove into the darkness we covered many miles with low speed limits, and passed one cherry farm after another. Montana is not easily identified with being cherry country, but this area had the biggest concentration of cherries that we saw anywhere.