We got a good night’s sleep at this campground, and it was surprisingly quiet, even in the morning. Before heading out toward West Yellowstone we got our packs prepared for our upcoming overnight hike. That will be one less thing we have to do at the trailhead.

Just up the road was a large lake called Earthquake Lake. In 1959 a major earthquake caused a landslide that blocked the Madison River. Earthquake Lake is the large lake that was formed by this event, and a waterfall now cascades over the landslide.

We weren’t sure whether any repair shops would be open later than noon on a Saturday, so we tried hard to cover the remaining 25 miles to West Yellowstone before then. We didn’t get out of the campground until 11:45, so it’s a good thing there was a shop that was open all day.

While the truck was in the shop, we had a few hours to get other stuff done. First thing on the agenda was breakfast at the Running Bear Pancake House. It was kind of average, but it was priced well for a busy tourist town.

Heading back to the repair shop, we passed what seemed like hundreds of tacky storefronts hawking t-shirts and trinkets. It represented everything we hate about major tourist towns like this.

This is a much larger town than we expected, and it mainly exists to serve as a base for exploring the park. So the tacky trinket hawkers are complemented by necessities like motels, cafes, outfitters, and repair garages.

Back at the shop, our mechanics had finally finished installing a new gasket and fluid filter on our transmission, and they changed the fluid. Ninety dollars later we were on our way to the park gate, and the Wyoming state line followed quickly.

The main area of Yellowstone National Park is the caldera of a collapsed volcano. They say it erupts once in 800,000 years, and that it last erupted 800,000 years ago. Comforting.

The molten rock is close enough to the surface to boil the ground water, so Yellowstone has more hot springs than the rest of the world combined. (WARNING! Even though they may look inviting, Yellowstone hot springs are deadly dangerous. If you jump in, you will cook like a lobster.)

This park is enormous… it’s bigger than some states, and the entire park is riddled with holes of all sizes that are oozing, spitting, spurting, spraying, spewing, belching and gushing every possible combination of steam and boiling water.

As we drove from West Yellowstone to our trailhead 35 miles into the park, we saw many areas where plumes of steam rose from the ground. The Madison River eventually split into the Firehole and Gibbon Rivers. Our destination was on the Firehole. We passed many lines of parked vehicles where people had stopped to photograph herds of elk, or an elusive moose lurking in the trees or tall grass.

A small thunderstorm passed overhead just as we began our hike on the Lone Star Trail. This was the first rain we had encountered since we were in Arizona. But much like the desert storms, this turned out to be a brief but annoying shower. 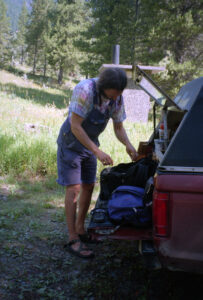 Preparing and selecting our gear before a hike into the Yellowstone backcountry. 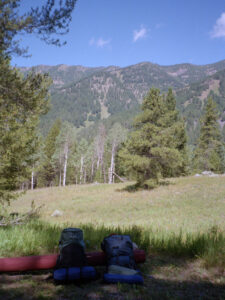 Our packs wait for us at a rest stop along the Lone Star Trail.

The first part of Lone Star Trail was once a narrow paved road (making it one of the few trails open to bicyclists). This made for a fairly easy hike. It wasn’t long before we came to a field of hot pots, which until then we had only seen from the highway. Up close and personal, it was amazing how alive the geology of this place is. As incredibly beautiful and active as these hot pots were, they were common and ordinary in this park.

Our next reward was to see a mother moose and calf – this time clearly and in broad daylight. The Firehole River was between us, so neither of us felt threatened by the other.

At the end of the crumbling blacktop trail is the Lone Star Geyser. “As the crow flies,” Lone Star is 5 miles from Old Faithful, but it’s a 2.5-mile hike or bike ride from the highway. It has a very consistent 3-hour cycle, and its eruptions are equally spectacular to those of its more famous cousin. But when Lone Star erupts, there may be a dozen other people watching with you, compared to the thousands that may be at the other place. This geyser was much more our style.

The Lone Star Geyser shoots water 50 feet in the air for 10-20 minutes, then it blows steam for a while after that. We arrived about 5 minutes after the steam phase had ended and the long quiet phase had begun. Such was our luck, but we were so happy to merely be there that we couldn’t be disappointed.

We were running out of daylight when we got to our campsite, so it was time to put our “bear drill” training to good use. Every campsite was equipped with some sort of a horizontal beam about 25 feet in the air, usually lashed to a tree on each end. We started to call this thing the “bear bar,” which conjured up images of Far Side cartoons.

The most important part of dealing with bears is to keep all food, food waste, utensils, empty beer bottles, toothpaste – anything with a scent that might attract a bear – all that stuff goes into a bag. Tie a rope (or stout string) to the bag, and tie a rock or stick to the other end. Fling the weighted end over the bear bar, and hoist the bag of food to the middle of the bear bar until it’s needed.

Another element of the bear drill is to make a lot of noise. They say that as you hike, you should clap and sing. We alternated between “Teddy Bears’ Picnic” and “Lions and Tigers and Bears – Oh My!”. Johnny Cash’s “Ring of Fire” seemed appropriate, but we avoided the Grateful Dead’s “Fire on the Mountain,” especially with major wildfires in the park 50 miles from us.

So far, after all these backcountry hikes, we still haven’t seen a bear. We try to be careful what we wish for… we don’t want any bears in our camps. But the ideal bear encounter (from the truck window, across a river while hiking, basically a safe but photo-friendly distance) has never come to pass.

Once we were all set up, we hung out by some hot springs on riverbank until dark. With storms brewing in the area, we kept all of our gear in the tent with us as we slept.