There were rip-roaring thunderstorms during the night. Not a dangerous amount of wind, but lots of thunder and lightning. We woke up to a stunningly blue sky. Our full day in the wilderness promised to be sunny and cloud-free without being oppressively hot or humid.

When we got our permits yesterday, the site where we started the day was already reserved for tonight. So today we need to move to another site about a mile and a half upstream. But before that, we hope to experience an eruption of the Lone Star Geyser. So we packed up the entire camp except for the tent and our camp chairs, and stored our gear in the tent.

While we were lounging on the river bank we got a visit from a ranger. Our conversation produced an explanation for the “no fires” rule for tonight’s campsite. The last time someone had a fire there, they thought they couldn’t put it out. No matter how much water they put on it, it kept smoking.

What they thought was smoke was steam. Underground steam vents in that area are getting close to the surface under the fire ring. That makes the ground warm enough to boil away any water that comes in contact with it. (At this relatively high elevation, the boiling point of water is lower than normal.)

Of all of our backcountry hikes, this was the first time we’d had a ranger come by to check on us. We were assured that the fires near Cody were comfortably far away from us, and we got to learn a bit more about this area of the park and what to expect.

We took a day hike back to the geyser and checked the log book that’s kept in a little box near an observation area. The last eruption was at 11:08am, and we were there at 11:30.

This was when we met the Geezer at the Geyser. He was a tall guy wearing a safari hat, probably in his 70s but with the excitement and enthusiasm of a seven-year-old. Asking when the last eruption was, he said “The major? It was about a half hour ago, and lasted [this many] minutes, and then it let off steam for [that many] minutes.”

We decided to wait around for the next eruption and claimed a little patch of shade under some nearby pine trees. We watched the Geezer at the Geyser bounding around and checking things out. He seemed like a retired geology professor who had been cooped up out of the field for too long. Once he was peeking into one of the holes while his companion was reading from a guide book, “boiling water can squirt out of these holes with no warning.” He stepped back upon hearing those words.

As we lounged under the trees waiting for the geyser to go off, our soundtrack was the distant excited voice of the Geezer at the Geyser, as he raved to his companions about this unique and special place. It was actually kind of adorable. 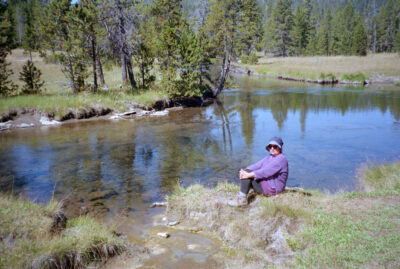 Rozie relaxes on the banks of the Firehole River in Yellowstone National Park. 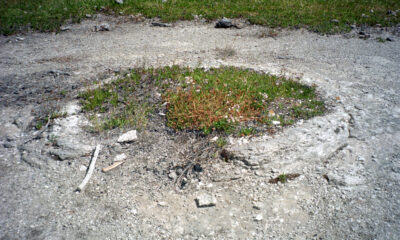 This is a hot pot that dried up, but still retains enough moisture and warmth to sustain its own micro-environment. 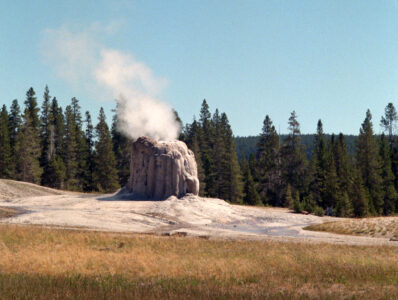 The Lone Star Geyser during one of its restless phases. 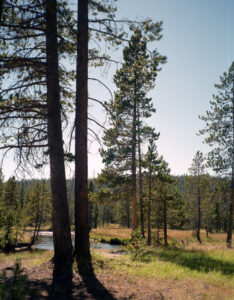 A last look at our Saturday night campsite before heading to Sunday’s campsite further upstream.

After an hour or so, the geyser got restless. This flatulent restless stage kept any boredom from setting in while waiting for the next eruption. Over time, the restlessness got more intense. Finally, we saw a continuous stream rise 30 feet for a few minutes before the geyser fell silent. Assuming the eruption was over, we slithered back into the woods.

We stopped at our campsite from this morning and packed up the tent for the hike to tonight’s campsite. A mile beyond that campsite, the trail crosses the Continental Divide. Between our campsite and the pass was what looked like a huge meadow, but in reality it was the marshes that formed the beginning of the Firehole River.

One of Rozie’s goals was to go to the source of the Missouri River. We had followed the biggest of the three branches (the Madison), and then followed the biggest of it’s branches (the Firehole). Our campsite is where marshes end and the Firehole River begins, and we’re drinking water that could have eventually flowed through Kansas City, St. Louis and beyond. We are at one of the sources of the Missouri River.