Let’s talk about sounds. There’s a sound that’s made by a rice kettle when the water has come to a boil, and the heat is turned down to sustain a slow simmer. That gurgling sound of a slow simmer is what we heard coming from the ground below us as we slept last night.

Poking our heads out of the tent early in the morning, we were greeted by the howls and yips of coyotes, and later we heard the calls of cranes. While we were having breakfast on the riverbank, we saw the cranes.

It was a little past noon when we had our packs on our backs and were marching down the trail to re-unite with the Big Red Dog, which was at the trailhead four miles away.

At the halfway point was our third visit to the Lone Star Geyser. Just as with our first two visits, we arrived five minutes after the eruption was finished. When we checked the log book, we found the entry for the eruption we saw yesterday. It turned out we had seen the minor eruption. The major eruption happened a few minutes after we had left. Sigh. 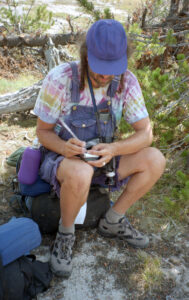 Obbie labels a video tape before leaving our campsite near the Firehole River. 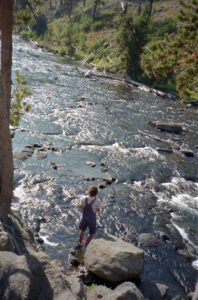 Standing on the banks of the Firehole River, hoping to see the moose that was seen from this spot two days earlier.

It was another one of those perfect days that the high country provides in the summer… bright and sunny, warm and dry, and great for a leisurely hike down the mountain. We knew we were getting close to the trailhead when we could hear the rumble of Harleys on the highway.

After living for two days on trail mix, we were looking forward to some of the food that was stored in the truck. Our meal plan for the end of the hike settled on bagel and cheese sandwiches. But those plans dramatically changed when we opened the truck to find it filled with mouse turds.

Yellowstone mice are apparently quite adept at squeezing into vehicles, no matter how well sealed and secured they are. Everything that hadn’t been in a solid container (which wasn’t a whole lot, really … it just seems that way) had been invaded and had to be thrown out. This included our bagels and our tortilla chips. The time that we had planned to spend eating got spent emptying the back of the truck and cleaning out the little black pellets that rodents like to leave all over the place.

The mice left some crackers alone and they couldn’t get to the cheese, so that can hold us until we get back to civilization. Due to wildfires near Cody, the East Entrance to Yellowstone – our most direct route home – was closed. To get to Buffalo and I-90, we would have to leave via the South Entrance and swing a couple of hundred miles out of our way via Dubois and Riverton.

It was a longer route, but it wasn’t a bad route. We got to dip our toes in the water and climb on rocks at Lewis Falls. That’s where we noticed we’d been playing road tag with a gay biker couple who had also stopped to romp in the waterfalls. After that, we got a glimpse of the Grand Tetons and found a spectacular under-appreciated drive to Dubois.

The Grand Tetons as seen over Jackson Lake.

Just before dark, we found a roadside eatery in Dubois that displayed the four magic words: All You Can Eat. After three days of hiking in the mountains while living on trail mix, cheese and crackers, we were hungry. We got filled up, but we’re starting to notice that the quality of restaurant food has been declining as we get further from the coast.

We drove another hour into the darkness to the next town, Riverton. The budget motel had a vacancy, so that was where we spent the night.