Our first day of travel was mostly spent packing and catching up on last-minute details. By early evening the minutes and the details had run out, and at 7:20 pm the Big Red Dog was finally crossing the Cass Street Bridge, leaving La Crosse and entering Minnesota. Thru the twilight, we traversed some territory that was new and unfamiliar, yet still in our back yard. For the first few hours of our trip, we got a last look at the rugged countryside, hardwood forests, and rustic dairy farms of the Driftless Region.

Somewhere between Hokah and Spring Grove, we found an old church that was intriguing not for its grandeur, but for its simplicity. It was a small wood-frame building wrapped in the kind of asphalt siding designed to look like blonde brick, even though it never fools anyone. The century-old markers in the adjacent graveyard were made in the shape of tree trunks, which indicates involvement in wood-related trades, perhaps lumberjacks or furniture builders or carvers …. 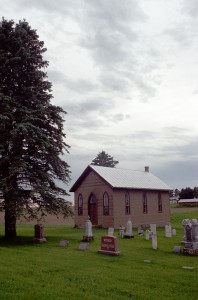 Union Ridge Church is an old country church on a ridgetop in southeast Minnesota. 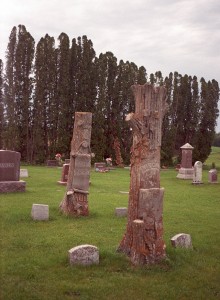 Most of the markers in the graveyard are over a hundred years old. 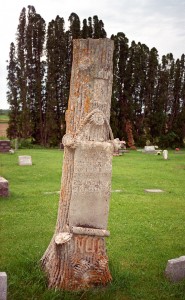 Legend has it that stones shaped like tree stumps marked the graves of lumberjacks. 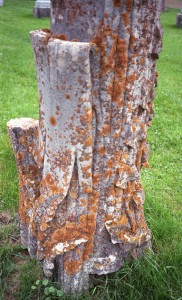 A layer of lichen inhabits many of these ancient gravestones at the Union Ridge Cemetery in southeast Minnesota.

Not much further down the road we encountered a line of cabooses. There were over half-a-dozen of them parked off the side of the highway, miles from the nearest railroad. Most of them still had their wheels, and they all still had their Burlington Northern paint jobs. The area seemed to be a staging area for cabooses that the railroad had just unloaded, but we’re suckers for train stuff, so we had to stop and climb on them and take pictures while we scratched our heads about where they came from. 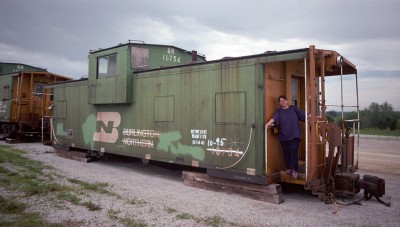 RoZ examines a caboose parked on a roadside near Spring Grove, Minnesota.

It seemed like the strangest place to expect to find cabooses. 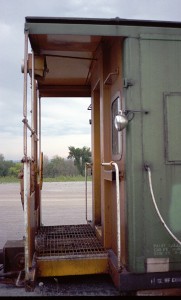 We’ve always fantasized about owning and living nomadically in a caboose. 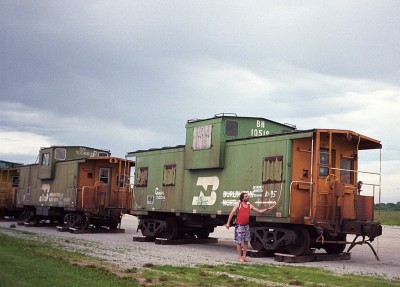 Most rail cars are much larger at close range than we expect them to be. 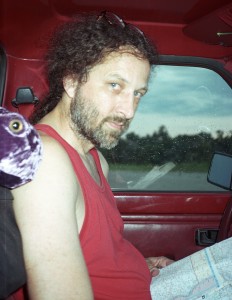 Obbie checks the map for our route into Iowa as Gorf looks on.

After dinner in Decorah, we decided to press on and try to make back the ten hours or so we lost trying to get out of town. US 20 was not too heavily trafficked, and even at night it was interesting to look at. The wind started blowing into our face as the drive progressed, and we finally landed at the Super 8 in Algona (about 40 miles north of Fort Dodge, and an hour or so west of Mason City) at about 2 am.