We arrived at the Gunnison KOA late last night, so our morning was the only chance to enjoy our cabin in the daytime. We were able to make coffee in our room, and we sat on a kind of front porch swing to have a relaxing morning.

But that was not to be, as the staff was nagging us to clear out so that they could clean the place for the next guests, who were scheduled to take over at 11 am sharp. It was funny how the folks who were so nice to us when they were checking us in, are now so stern and pushy once there’s no more money to make from us.

For a long time, the daily weather report would include the hottest and the coldest temperatures in the country, and Gunnison Colorado was the “coldest place in the country” on a regular basis. We were starting to feel that way about the people in the town, as people at other places in Gunnison were not helpful or even polite. We started going down the road, feeling bad.

We noticed that we were driving high above the north shore of Gunnison Reservoir. We also noticed that the green forests had given way to a drier landscape with a redder color palette. In search of a place to stop and relax for a bit, we saw a sign for “Rainbow Lake Road.” Stopping by a lake sounded nice, so we turned north to find Rainbow Lake. 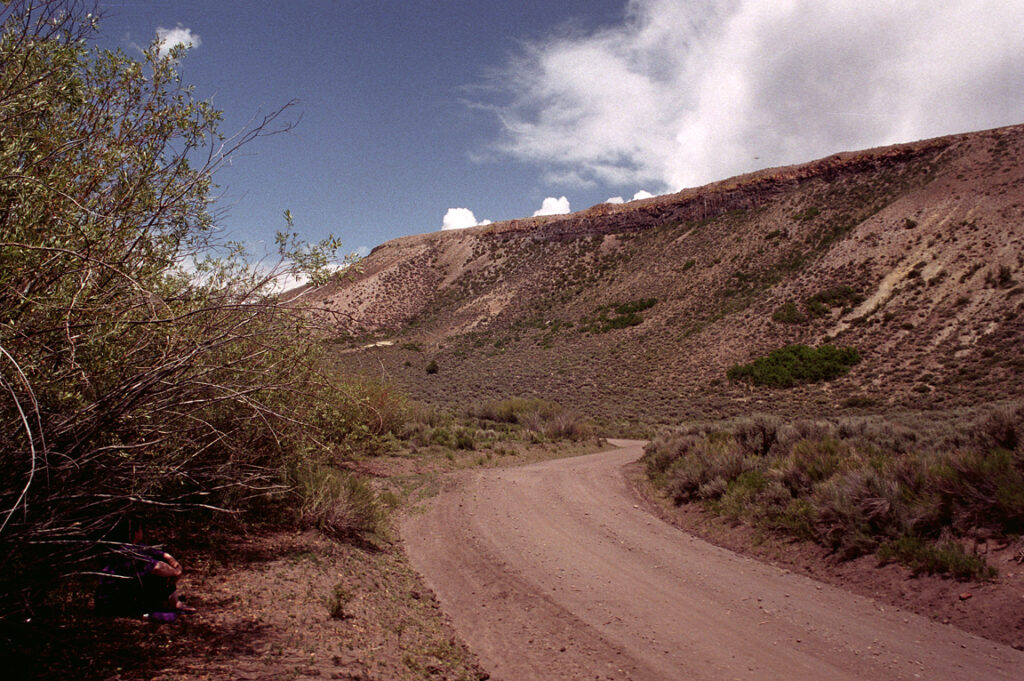 Rozie relaxes in the shade along a high desert dirt road west of Gunnison CO.

We never did find it, and gave up after about five miles. We stopped the truck on the deserted dirt road, turned around, and pulled over next to some shade-providing bushes. We were no longer in alpine meadows, we were on the edge of the south-western desert. Instead of relaxing on soft green grass, we sat on “grickle grass.” Dr. Seuse had many useful names for things in nature we couldn’t identify.

Our next destination was Telluride, where we’d hoped to drop in for the first night of the Telluride Bluegrass Festival. The sun had gone down by the time we got there, and we were hungry, so we had dinner in an eatery called Baked. The place was busy, staff & clientele were funky & friendly, and prices were reasonable by Telluride standards.

While we ate we looked at one of the free papers lying around the place, and we were struck by the real estate ads. Anyone who wants a place to live in Telluride has to come up with a seven-figure sum, even for a tiny condo. Then we wondered about the staff feeding us. Can they afford to live in Telluride? Probably not, so where do they live?

Many resort towns in Colorado are run by armies of low-wage workers. But the rents in these towns are so high, how these workers manage to survive is a mystery we still haven’t solved.

It was getting close to 9 pm, and if we were gonna stay in Telluride it was time to find a room. It felt clear that if we could find a room, we wouldn’t be happy with the cost. It turned out the music from the main stage was broadcast on the local FM station, so we listened to Bela Fleck’s set on the radio as we drove out of town toward the south.

That plan worked for about a half hour. Telluride occupies a box canyon. When we went over a mountain pass that took us out of that canyon, our signal abruptly faded out. We drove into the night until we saw a national forest road. We followed it until there was a level pull-out, which is where we set up our tent for the night.