In 1991, Obbie was traveling through Nederland and looking for a free place to camp in his step van. A local resident said, “I know of a place, and I’ll show it to you if you bring my bike and me up there.” This person wanted to ride his bike back down the mountain, but Obbie’s drive up was worth the discovery.

Ten years later we came back to that place. Caribou was a silver mining town in the 1870s that once had 3,000 people living there. It went bust pretty quickly, and after fires and decay all that remains are traces of old foundations.

On one side of the road from our campsite are the stone shells of two. They were not part of the original town, which occupied the low lands across the road.

After having our morning coffee, we packed up our camp and hiked around a bit. In a shady spot was a surviving snow drift, so we threw ceremonial June snowballs at each other. It was a beautiful sunny day, and not too hot where we were at ten thousand feet. 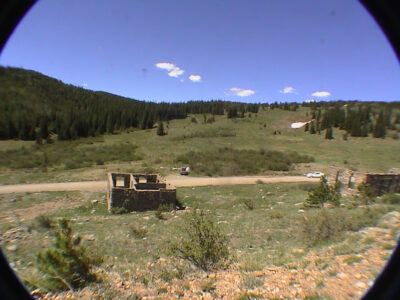 On the far side of the road is the site of the 1870’s mining town of Caribou. 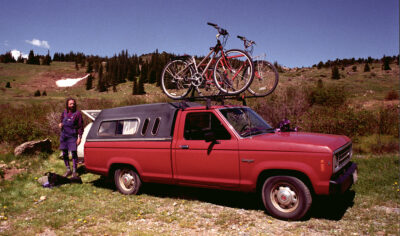 Obbie and the Big Red Dog at our campsite in Caribou. 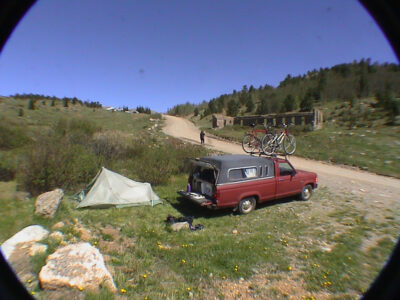 A morning view of our Caribou campsite, which we hastily set up in darkness the previous night.. 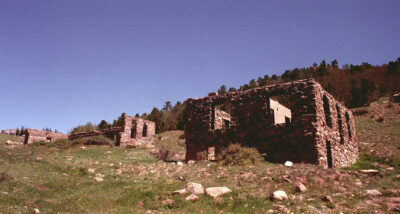 The remains of stone buildings from c. 1920’s, long after the original settlement had dissolved. 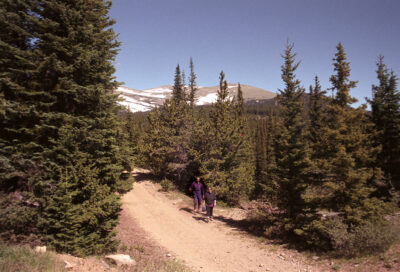 Obbie and Rozie return from a morning hike around Caribou.

Our hiking area was also popular with “off-road enthusiasts.” We saw lots of big dusty pick-up trucks carrying ATVs and dirt bikes. When the dust and noise got to a certain level, it convinced us to move on.

We got to Nederland early enough to take in a lunch buffet at a Nepalese place called Katmandu. The food was fantastic and it was nice to have something different than the usual road food.

We drove north in search of another camp site. We wanted to wake up within easy reach of Rocky Mountain National Park, but not close enough to encounter crowds. We found a national forest camp site north of Ward in an area called Peaceful Valley. Since the weekend crowd had cleared out, we had most of the campsite to ourselves, so we settled into a spot within earshot of the babbling stream.

With plenty of daylight to work with, we explored the hiking trail leading up the mountain from our camp. We encountered a group of hikers coming down, loaded up with fuel canisters and clanking pots and pans. We had heard tales of trails from this area that crossed the mountains and came out in Granby. It was easy to imagine this team coming from there.

Obbie poses on a rock in Middle St. Vrain Creek during a late afternoon hike.