Glacier Basin camp was made for trailers and RVs more than it was made for tents. Our pad was not quite level, and the noise from kids, dogs and generators on these closely-packed sites made for a restless night.

We knew the day was going to end with us carrying our packs into the backcountry, so we got them together as we broke camp. As we left the campground, we took a detour toward the park entrance…. to the office for wilderness permits.

Wilderness permits don’t cost anything, and are required for overnight camping in the backcountry. There are good reasons for the park to require them. It gives them a chance to go over the ground rules for overnight hikes. Also, it gives them a record of who is where in the event of an emergency (wildfire, flash flood, etc.).

They also gave us a briefing on how to behave if encountering a bear… something we called “the bear drill.” Campsites have a structure that looks like a goal post with the cross bar twenty feet up. They recommend that we put food and toiletries into a bag, tie a rope to it, and suspend the bag from the rope over the bar. That way the bears can’t reach it.

If you see a bear, don’t run… You can’t outrun the bear, and running will encourage it to chase you. Look and act big. Make noise. If all else fails, curl up into a tight fetal position, like a pill-ball.

Finally, we need to reserve one of the designated camp sites. Our plan was to hike the Colorado River Trail, which was on the other side of the park. We chose the closest available site on that trail. After all, the trailhead is hours away on the opposite side of the park, and it was already mid-afternoon.

Permits in hand, we headed west on Trail Ridge Road. It’s one of the most iconic scenic drives in the country, but it can also be a slow-moving parade of vans, motorhomes, and distracted drivers. There’s a relatively low posted speed limit, but the true pace is set by the heaviest and most underpowered vehicle on the road.

As we climbed the mountain, we went from dense pine forest through a series of climate transitions until we were in alpine tundra and surrounded by snowy peaks. We pulled over briefly to photograph the first herd of elk that we saw… hundreds of yards from the road. Just before the road started descending again we saw another group of elk. This one was much closer to the road, but the lack of pull-out areas resulted in a bit of a traffic jam. 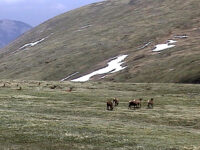 This is typical of what a herd of elk looks like from the roadside. 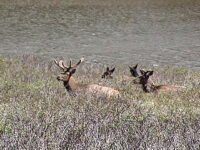 If you’re lucky (and are willing to stop traffic), you might get *this* close. 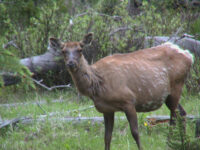 Taking a break on the back-country hiking trail, we found elk grazing right in front of us. 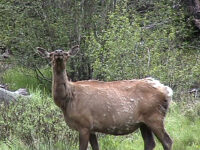 This matriarch sniffs the air to determine that we’re OK.

If was 4:30 when we finally had our packs on and were setting out on the Colorado River Trail. When we had hiked long enough to be away from the highway noise, we took a rest stop on a meadow. We looked up from where we were sitting, and a group of elk were grazing less than fifty feet from us.

While we were passing a rock field we saw a group of marmots. They made us think of the “brown barbaloots” that Dr. Seuss described in “The Lorax.” Some of them were playful while others watched over the scene from higher up. 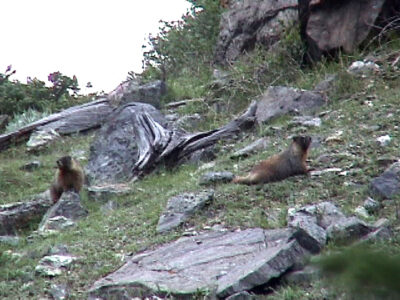 A group of marmots watches over us from a hillside.

By the time the sun was going down, we hadn’t reached our reserved campsite. We were gonna have to improvise. So we found a fairly level meadow close to the trail and set up our camp there. No fires are allowed outside designated campsites, but that wasn’t a problem.

Our dinner was trail mix, cheese & crackers, yogurt pretzels, and a beer. The nighttime air was cool, crisp and bug-free. And the stars were incredible.