We opened the door of our tent on the side of Taylor Creek Road and found that we were once again in lush green forests. It was sunny, but the air was cool and crisp. Occasionally a large vehicle would pass and shake our campsite a bit, but they were mostly big pickup trucks pulling horse trailers. They weren’t worried about us; they were much more interested in things further up the mountain.

Our map showed us a town called Stoner not far down the road. It wasn’t as much of a “town” as it was a roadside motel and cafe. Expecting bland diner food, we were pleasantly surprised by the quality of our breakfast. We were well fed with good food by good people in a great setting. Our omelettes were eaten at tables outside while we watched hummingbirds get their breakfasts. 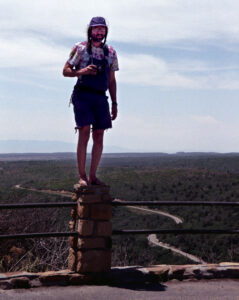 Our first stop of the day was Mesa Verde National Park, and we have good news from there. The damage from last year’s fires was obvious as we drove through. But the damage was limited to areas away from the ancient ruins, and the land is already vigorously regenerating itself. The burned frames of trees that were left behind will apparently feed the new growth of this desert forest. 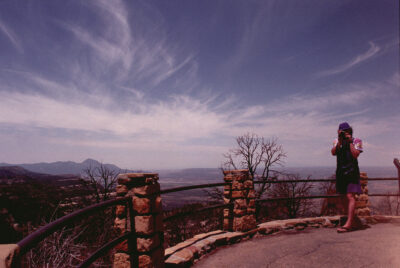 Obbie photographs Rozie at an overlook near the entrance to Mesa Verde National Park. 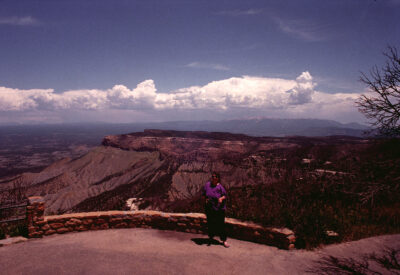 Seeing the cliff dwellings was a reminder that no picture, film, computer screen, or virtual reality can ever replace the live 3D experience. It is impossible to appreciate the scale of such structures or the environment they occupy without actually being there. 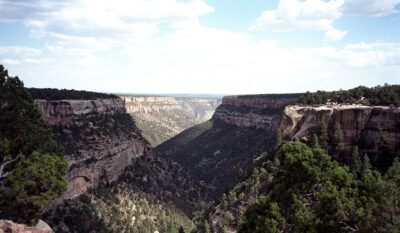 The Mesa Verde cliff dwellings were in the sides of this canyon. Viewing areas on each side allowed for views of the dwellings on the opposite side of the canyon. 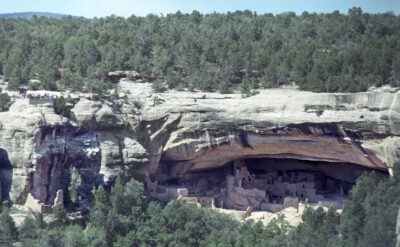 When you look closely, you see that the cliff dwellings are quite large. For a sense of scale, notice the people on top of the cliff on the left side of the image. 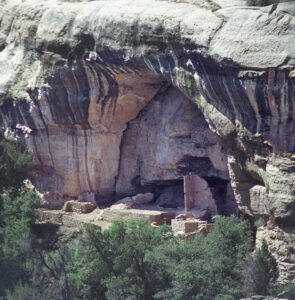 All of the cliff dwellings were at the same elevation, which made us wonder whether they were along the shore of an ancient lake. 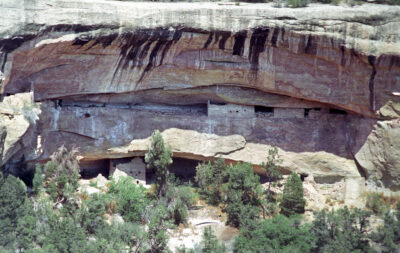 We didn’t wonder how houses were fit into those crevices as much as we wondered how the residents got up and down to reach them.

Our best Mesa Verde experience came from an obscure corner of the park, where the ancient natives built “check dams” along a gulley to plant their gardens. A trail passed one terrace after another, built with the red rock that is indigenous to the area. Yes, we have pictures, but they will not replace the live experience. 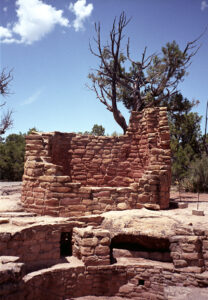 Mesa Verde also had areas with dwellings that were NOT in the cliffs. 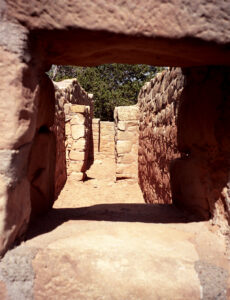 Some of these structures were food storage areas, and there were small entrances below ground level. 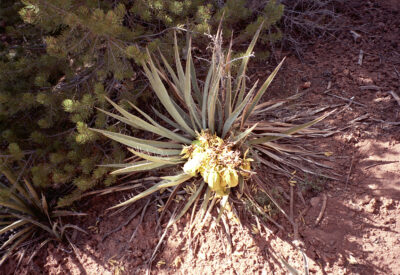 A yucca plant found in the park. 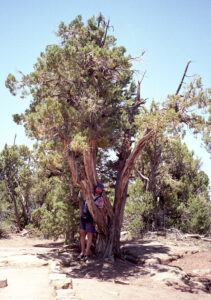 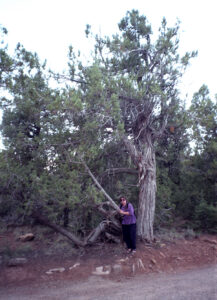 We will give credit to the park service for using on-site materials in their construction, rather than trucking in loads of concrete. Everything from the park headquarters to roadside ditches were built of the same red native rock.

On our way out of the park, a wild turkey crossed the road with her babies right in front of us. No, she didn’t pose for pictures.

Leaving Cortez, we went into the Four Corners along a seldom-travelled canyon on McElmo Creek. The drive was slower-going than the alternative, but the vistas were worth it. The surface vistas were complimented by skyscapes of the storms we were dodging along the way.

After years of seeing them used as a backdrop in movies, magazine ads and tv commercials, we finally got to see the massive sculptured rocks of Monument Valley. Again, no picture or movie can substitute for the live on-site 3D experience. 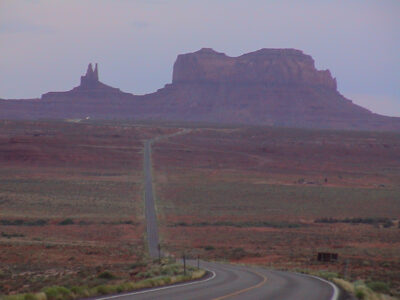 Looking south at the iconic image of Monument Valley. 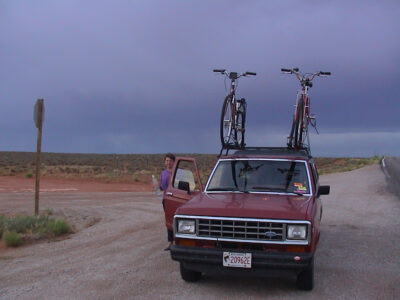 Turning around a looking north from the same spot.

An annoyance: we’ve been trying to sample (record) some of the sounds of the natural environment where we go, but we’ve found that no matter how far you get off the beaten path, you can’t get away from traffic noise. If it’s not a truck on a road miles away, it’s a passing jet overhead. We’ve gone to some of the most remote places one could find, and it’s safe to say there is nowhere on the North American continent to totally escape the sounds of human machinery.

As darkness fell upon the land we arrived at Kayenta, the only town of any size on the Navaho reservation. The only lodges in town were full, but a place was suggested to us about ten miles down the road in Tsegi.

That motel turned out to be too expensive for our tastes, but we did get fed. We got a really good deal on an order of fry bread and beans from the Tsegi Canyon Cafe, though the rest of their menu was your run-of-the-mill diner food.

That left us fortified enough to take on the 100-mile drive to Page, where we found a $40/night room, saving enough money to make the extra drive worth it.