The day began in Page, Arizona. This is the location of the Glen Canyon Dam, which holds Lake Powell. Not too long ago, the area occupied by Lake Powell was a series of deep, rugged and beautiful canyons; and it was prime territory for hiking and rafting. The characters in Edward Abbey’s book “The Monkey Wrench Gang” fantasized about destroying the Glen Canyon Dam and restoring the canyons that were taken away. In an ironic twist of history, there is now serious talk about doing exactly that, many years after Abbey’s death.

So before leaving Page, we had to get a look at that dam. We also got to see the same river that we last saw as a mountain stream from the roadside: the Colorado River.

The climate has taken a dramatic turn. The cool moist forests of the Rockies have given way to the hot dry deserts of the southwest. Around Page, the land had a color between beige and rusty red, and it was completely barren.

We headed south on US-89, which was the road to Flagstaff. But we were going to the South rim of the Grand Canyon, so we took a hard right turn after about an hour. Along the way we bought some jewelry from some Navaho people at a roadside stand, which are common along major highways through Indigenous lands.

A large sign welcomed us to Grand Canyon National Park, but it was quite a few miles before we were stopped at a gate to flash our National Park Pass. Right after that was the first major facility, the Desert Watchtower. This is a four-story tower built in the 1930’s, designed to look like a Pueblo tower, even though the Pueblo never built towers that big. The stone work on the outside actually conceals more modern designs that enable its size and durability. 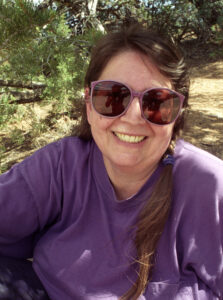 Rozie relaxes in the shade near the Desert Watchtower.

The Desert Watchtower, near the eastern entrance of Grand Canyon National Park. 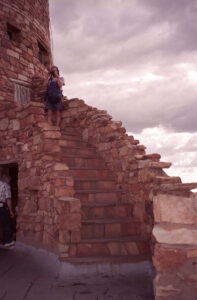 Obbie finds an elevated position on the Desert Watchtower to photograph the Grand Canyon.

Rozie photographs the Desert Watchtower from the attached overlook (a primitive composite of two images). 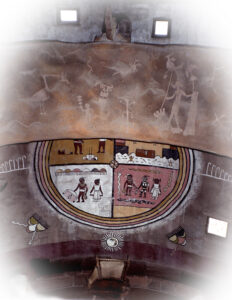 Some of the artwork on the interior walls of the Desert Watchtower. 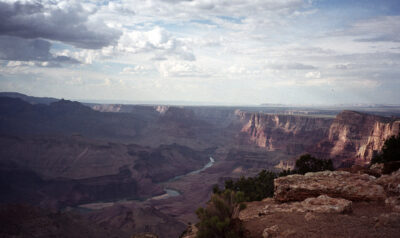 An afternoon view of the Grand Canyon looking north from Desert Watchtower. 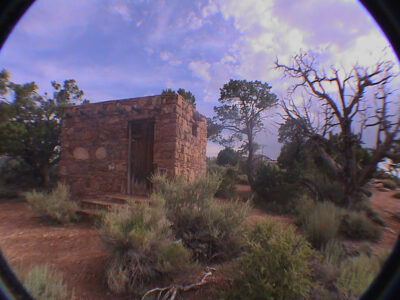 The original outhouse built for the Desert Watchtower is no longer in service. 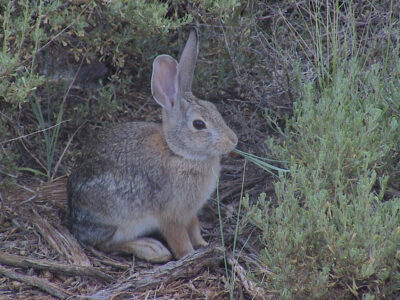 A bunny shades itself in the sage near the Desert Watchtower.

Along with exploring the inside (drop a quarter into a turnstile for admission) and taking lots of pictures, we got some questions answered. Wilderness camping was not going to be an option. There are very few opportunities at this park, and reservations are filled months to years in advance.

When we asked about campgrounds, we were told that if we go a few more miles and turn left, that road leaves the park and enters the adjacent national forest. And in the national forest, we can camp almost anywhere we want to (subject to some very reasonable restrictions).

As we relaxed in our camp site, tour trucks passed by on the forest road. They were trucks with rows of seats set up on a flatbed, with each row perched a bit higher than the row in front of it.

After dark, we invested some time in admiring the stars from this high, dark and dry location. But we weren’t as remote as we thought, since a very busy aerial highway was right over our heads. Planes passed less than 30 seconds apart, one right after another, all night.