It was already past noon by the time we woke up, ate breakfast, and hit the road. Before starting to drive in earnest, we stopped at a park near Algona to make snacks for the day and listen to the birds. Our goal was to get to North Platte by the end of the second day, but a review of our maps made that look fairly out-of-reach. 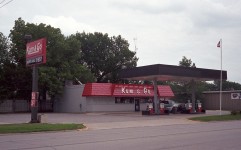 This chain of convenience stores has a name appropriate for a drive-thru brothel. 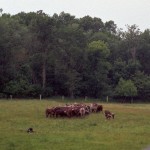 A small herd of longhorn cattle huddle together in northwest Iowa.

Old railroad cars are repurposed as outbuildings at a farm in western Iowa.

It was late afternoon when we made it to Sioux City, which was our goal for the first day. We found a “slacker haven” coffee shop downtown, and struck up a conversation with the nice young woman at the counter. It turns out that she will be moving to La Crosse in the fall to start studying at Viterbo University. It’s a remarkably small world after all.

The rest of the day’s driving was punctuated by storms … big, dark, ugly storms … real wrath-of-God kind of stuff. The wind slapped the truck around the road as we drove through waterfalls of rain; and nature’s pyrotechnics zapped, crackled, and boomed all around us. We monitored the local public radio stations for the evening news and storm warnings. Every few minutes a new alert would inform us of the latest tornado sightings. Obbie drove on while Rosie consulted the maps, trying to figure out how close we were to the funnel clouds. The closest one of the evening was in the same county, but still a safe distance away.

Eventually we emerged onto the other side of the line of storms. As we made our way across Nebraska on US 20, we noticed how much more interesting and less stressful this route was compared with the Interstate. Our decision to forgo the frantic, crowded and boring Interstate system for the back roads was paying off. Crossing the plains on the back roads gave us the chance to get a close look at the old homes and farmsteads where people still live and work.

As the sun went down and night descended upon the plains, we could still see distant flashes of lightning. The ground was also wet and it was getting late, so breaking in our camping gear was going to have to wait for another night. It took a bit more driving than we wanted to do before we finally found a place to stay… a little old roadside place in Sargent that only wanted $32. Credit cards were not acceptable, but at that price, that was OK. As the wrath of God pounded through the night, we were glad not to be in our tent.