In the morning, we were awakened by the roar of helicopters and small planes making their daily rounds hauling mutants with too much money to spend over and into the canyon.

(A side note: often you will see us use the word “mutant” to describe a type of tourist that seems to be 80-90% of the population of major destinations. A mutant is someone who goes to a place because someone told them it was a place they should go. The mutants have no REAL appreciation for the places they overrun. They do everything possible to insulate themselves from the environments they visit, and usually contaminate these places with the sounds, traffic, and smells of the cities and suburbs they come from.)

Something we noticed on our way into our campsite that we didn’t have time to check out before nightfall was a tall metal ranger tower. As we were leaving for Grand Canyon Village, we stopped to check it out. It had a stairway leading to a locked ranger shelter at the top. There was a sign at the bottom that read (paraphrasing), “you can climb it if you want to, but please don’t sue us if you hurt yourself.” Obbie couldn’t resist making the climb and getting pictures from the top. 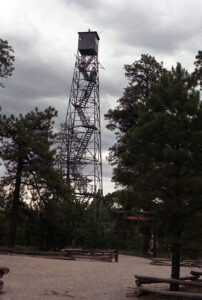 Grandview Lookout Tower is a ranger tower in the Kaibab National Forest. 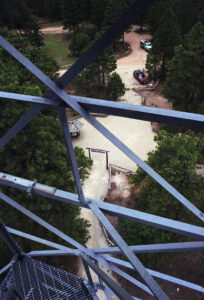 This is the view of the parking area below Grandview Lookout Tower. 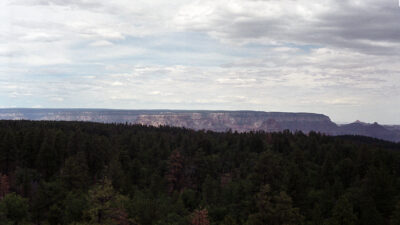 Since the tower rises above the tree tops, you can almost see into the nearby canyon. 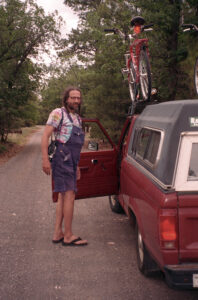 We’re ready to leave the tower to move on to our next adventure.

Arriving at Grand Canyon Village, while looking for a parking space near our trailhead we stumbled upon a vintage steam train with lines of people waiting to board. We parked near the train and inquired about riding it. “You can ride the train if you’re willing to ride one-way to Williams.” We’re not quite ready for that today.

The Grand Canyon Railroad was completed early in the twentieth century, fell on hard times when people started to drive their own cars to the canyon, and was revived in 1989. Today it was running with a vintage steam locomotive, assisted by a 1950’s era diesel locomotive. We ogled the train up and down from front to back until it left for Williams. Next time we come to Grand Canyon, it’s going to be on this train. 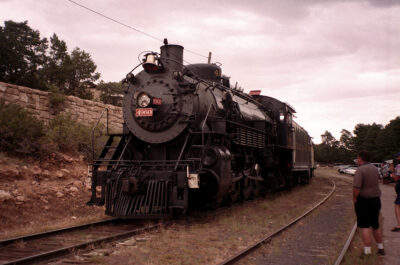 The lead locomotive of the Grand Canyon Railroad. 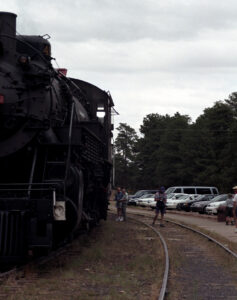 Obbie “inspects” the train as it prepares to make its run to Williams.

Once we were finished train geeking, we were ready to hike into the canyon. It seems that only about 1% of park-goers venture off the rim, and the easiest and most popular trail to do so is the Bright Angel Trail. It descends into the canyon to the riverbed and beyond. For the seriously ambitious who have a couple of days, you can follow this trail to the North Rim. For the rest of us, for each hour you spend hiking down the canyon wall, allow an hour and a half to climb back out. Wear a shady hat and bring/drink lots of water. 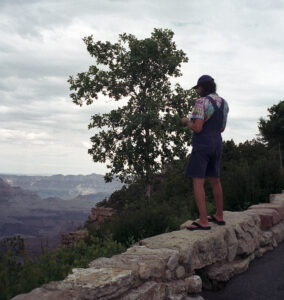 Obbie looks into the Grand Canyon from the rim. 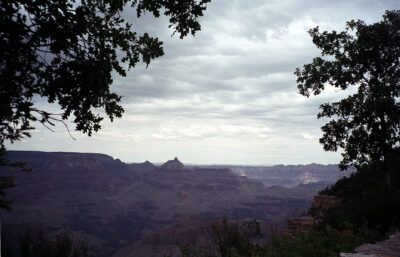 The Grand Canyon, late on an early summer afternoon. 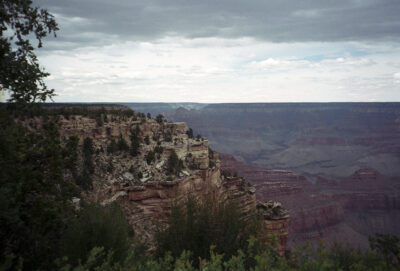 The Grand Canyon from near the top of the Bright Angel Trail. 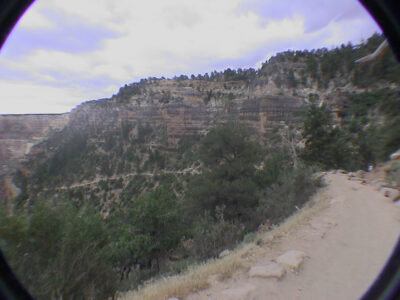 A view of the Bright Angel Trail leading into the Grand Canyon. 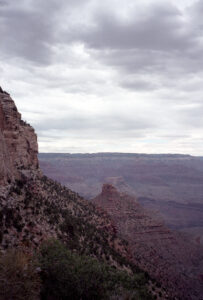 A view of the Grand Canyon from below the rim.

We hiked down to the first water station and then climbed back out. The daylight was running out as we drove south, past the helicopter airport and the expensive hotels on our way to Williams. After all that hiking and climbing we were hungry, and found a great meal at the Pine Country Restaurant. The place was quite popular, but we didn’t have to wait; and it was non-smoking, which can be rare in this part of Arizona. Between us, we had orders of baked chicken and fried chicken. Each plate had a half chicken, potatoes, veggies, and soup or salad. We got plenty of food at a decent price.

At this time of year, it’s best to cross the Arizona desert in the “cool” hours of the night, so we pressed on toward Kingman. Even in the dead of night, our air conditioner was a necessary accessory. At the first exit in Kingman, we found a motel with $30 rooms, and since they all had working AC, we took one.